Top Posts
Knowing the One Who Always Keeps His Word
Pregnancy Resource Centers Fight For Life Amidst Opposition
This World is Not Our Home
Lessons Learned From a Gingerbread House
Let There Be Peace on Earth
‘I Wanna Dance’ movie: Whitney Houston’s success and...
Fact Finding, Sight Seeing, and Prayer Walking
Kidney donation led to 8 life-saving surgeries
The Power of Curiosity
When Love Came Down at Christmas
Home ANS Feature Bible translated into its 700th language

High Wycombe, England (ANS) – A new milestone has been reached as the Bible has been translated into its 700th language, according to Wycliffe Bible Translators.

The charity reports the milestone is indicative of the acceleration that is happening in the work of Bible translation – to the extent that it is impossible to state which translation was actually the 700th, as there were several dedications of physical Bibles as well as several being made available online and via apps, all at about the same time. 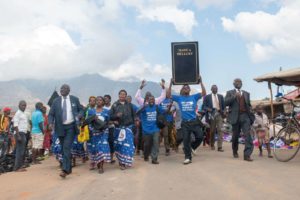 Marching through Chiringa village with a representation of the Ellomwe Bible.

James Poole, Executive Director of Wycliffe Bible Translators, says: ‘This is such exciting news, and represents the tremendous work that Bible translators are doing across the world. Every time we hear of the Bible being translated into another language, we know that means that for the first time the people in that language group can fully access the complete picture of God’s story.’

James continues: ‘It’s good to take a step back and realise what this 700th Bible means: 5.7 billion people who speak 700 languages now have the Bible in the language that speaks to them best. That is a remarkable figure and continues to grow. However, there are still about 1.5 billion people – that’s roughly 1 in 5 – who do not have the Bible in their language. That’s an injustice that Bible translation teams worldwide continue to work to put right.’

Although we cannot be certain which was actually the 700th translation, there have been several dedications recently that might have been the 700th and that sum up the joy and celebration that comes with a newly translated Bible.

The Huichol (Wixáritari) Bible was launched in Mexico on 10 July 2020. One participant at the launch event said: ‘We are so happy that we now have the complete Bible, the Old and New Testaments.’ The New Testament was completed in 1968, and it has taken a further 52 years of faithful service by the Huichol Bible translation team to complete the job.

In contrast, the Ellomwe Bible was launched in Malawi just five years after the Ellomwe New Testament was published. Hundreds of people danced and sang to celebrate the launch of the Bible. Senior Chief Nazombe, who received a copy of the new Bible on behalf of the Ellomwe community, said: ‘I am grateful to God that I can witness this in my lifetime.’

Around the same time, new additions to YouVersion (the online and mobile Bible app) included two Nigerian languages – a newly edited version in the Tiv language (which was first published in 1964) and the Igede Bible.

James says: ‘It’s amazing that there is so much Bible translation going on that we can’t pinpoint the 700th Bible. We live in exciting times, when the vision that all people will be able to read or hear God’s word in their language is becoming a reality.’