Charlotte, NC, USA (ANS) – The Billy Graham Rapid Response Team (RRT) is sending crisis-trained chaplains to Kenosha, Wisconsin, where the area is in turmoil with violent protests surrounding the police shooting of Jacob Blake on Sunday.

“As the unrest continues, we were invited by local church leadership in Kenosha to have our chaplains there to minister to the community,” said Josh Holland, assistant director of the RRT. “We are praying that in such a tragic situation that God will use our chaplains to bring the peace and comfort that we know only comes through Christ.” 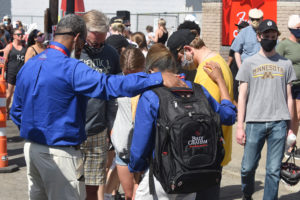 Blake was shot multiple times by a police officer after officers responded to a domestic incident. Protests began shortly after the shooting and turned deadly Tuesday evening when two people were killed and one other person was injured.

The RRT sent chaplains to Minneapolis, Charlotte and Greensboro in June in response to protests after George Floyd was killed by a police officer. Chaplains also provided ministry in Charlotte for protests during the Republican National Convention and during the Pray on MLK event in August.

True Value and Worth in the Kingdom of God