Top Posts
Knowing the One Who Always Keeps His Word
Pregnancy Resource Centers Fight For Life Amidst Opposition
This World is Not Our Home
Lessons Learned From a Gingerbread House
Let There Be Peace on Earth
‘I Wanna Dance’ movie: Whitney Houston’s success and...
Fact Finding, Sight Seeing, and Prayer Walking
Kidney donation led to 8 life-saving surgeries
The Power of Curiosity
When Love Came Down at Christmas
Home World Missions Blackouts, shortages frustrate Venezuelans as Crisis Continues

Experts say the aging infrastructure could be damaged beyond repair. So too is the patience of the people suffering days on end without lights, water, or communications, according to CBNNews.com. 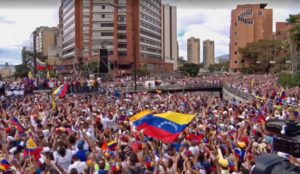 Crowds of Venezuelans fill the streets

The public hospital in Cucuta is just overwhelmed right now, because of the all the Venezuelans coming in for treatment.

Since there are almost no hospitals in Venezuela who can treat people — dialysis patients, pregnant mothers, gunshot wounds, it doesn’t matter. They are all coming across the river and coming to the public hospital for help.

In the maternity ward, dozens of women line the hallways in various stages of labor. The hospital has already spent more than $15 million treating Venezuelans who can’t afford to pay.

For those unable to get to Colombia, the power outages bring deadly consequences. One media outlet interviewed a man who lost his wife.

“She died because there was no assistance in the hospital. There were no medicines. So the love of my life just died!,” he yelled into the extended microphone.

“The mother of my children!  I’ve had enough of this government!  They are killing us with hunger – with no health care!  And now I’m not afraid anymore!  Do what you want to me, Maduro!  You killed my wife!  Go ahead and kill me!”

“We waited from 8 am to 4 pm to be seen by our doctor back home, and she told us he needed antihistamines. But there weren’t any available,” one Venezuelan woman told CBN News. “Operation Blessing gave us medicine, vitamins the babies needed, and antibiotics.”

“If I had left him there he would have died, without a doubt.  Because there, neither the doctors nor the hospitals are working,” the woman said.  “It’s too bad you can’t bring these medicines to the Venezuelan side, because for sure the people there need it so much.

“It’s hard to see. Here you can help me, but those people can’t get help because they can’t get across,” she said.

Into this desperation, Operation Blessing is bringing hope. Just across the border, the Operation Blessing distribution center gives out medicine and other supplies to refugees, many traveling from deep inside Venezuela to get here.

As Operation Blessing serves the desperate on the Colombian border, the needs are even greater inside Venezuela.

The ongoing crisis in Venezuela is now officially the worst in that country’s history. More than three million people have fled Venezuela’s poverty, corruption, crime, and despair.

Self-declared interim president, Juan Guaido, has returned to the country to renew his campaign to topple the government of President Nicolas Maduro.

Hundreds of tons of aid sent by the United States, Brazil, and Colombia in support of Guaido caused violent clashes at border crossings as Venezuelan guard troops loyal to Maduro burned the aid in front of starving Venezuelans.

Insisting there is no crisis, President Maduro has cut relations completely with Colombia and accuses the United States of planning an invasion.

Meanwhile, desperate Venezuelans do whatever they must to survive, including smuggling scrap metal across the porous border and even selling their bodies in order to eat.

The US is slapping more sanctions on Maduro’s government and ramping up the pressure for him to step down. But that is unlikely to happen as long as Cuba, Russia, and Iran continue to support Maduro.