Top Posts
The Significance of the Seventh Man
Will A Second Jesus People Movement Spring From...
It’s Never Too Late to Share your Faith
‘Elvis’ movie: All Shook Up meets Heartbreak Hotel
This Pastor Believes Rising Gun Violence And Conversations...
God’s Promises Can Lead to Lemonade
How a truck driver, homeless man, and Iranian...
The high adventure of saving lives and changing...
The simplicity of life in union with Christ
Kahlhamer and McIver: Scottsdale Museum of Contemporary Art
Home World Missions Bob Finley, Missionary Statesman and Pioneer, to be Buried this Weekend

Bob Finley, Missionary Statesman and Pioneer, to be Buried this Weekend

CHARLOTTESVILLE, VIRGINIA (ANS) – Dr. Bob Finley, missions pioneer and father of the modern indigenous missions’ movement, will be honored Saturday in a memorial service. His burial will be on Sunday at Monticello, almost in the shadow of Thomas Jefferson’s tomb and estate. Bob Finley went to be with the Lord on Friday, March 22, 2019. 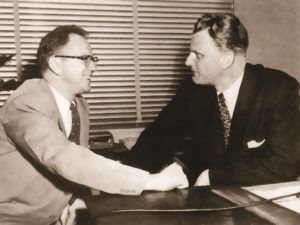 Mission leaders from around the world will attend to honor him for his lifetime of leadership and advocacy. He was 96 at the time of his home-going. His burial service will be Sunday, April 7 at 3 p.m. in Monticello Memory Gardens.

“Robert V. Finley was an important mentor and ‘father in the faith’ for me as well as a boss and patron,” said Bill Bray, a missionary journalist and foreign correspondent who has traveled to 55 countries on special assignments for religious and secular news organizations.

“Both my wife Ivy and I were able to spend many hours at his bedside in the last weeks of his life — along with other missionary colleagues who had served with him over recent decades,” Bray told ASSIST News Service (www.assistnews.net) .Dr. Finley was among the last of the colonial-era missionary evangelists to serve in the Far East from 1948-1951.

“When he returned from his aborted attempts to reach China, North Korean and Japan, he organized and led a new movement aiding indigenous missions and evangelism,” said Bray.

More than 800 native mission boards and organizations have since spun out of the movement in every country of the world. In the United States, he founded three mission support agencies: Overseas Students Mission, International Students, and Christian Aid.

Bray continued: “Bob Finley turned over the leadership of OSM to me in 2012 and entrusted me with carrying on the OSM vision – although I have continued by bi-vocational career as a missionary journalist and author.

“My personal relationship with Dr. Finley goes back to 1964. I have been his disciple almost all my missionary life, but I still didn’t understand what made him tick. As a colleague, I eventually began to understand where his discipleship vision fit into the big picture. He never wanted the spotlight on himself but preferred to enable others from the sidelines. 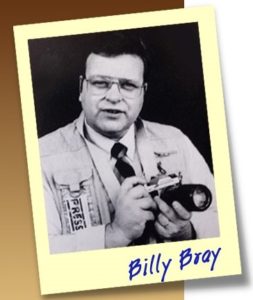 Bill Bray as a news correspondent in earlier days.

“He was always a gadfly, even in my student days at Moody Bible Institute in Chicago, said Bray, adding: “When he visited Chicago, he ruffled the feathers of a lot of folks in the mission’s department – including my own. I had already accepted a calling to foreign missions and was preparing to go to India as a literature evangelist with Operation Mobilization – Send the Light.

“My mindset at the time was still focused on me and what I could do for the Lord, not on motivating others to pick up the Great Commission and fulfill it among their own people”

Returning from his own missionary efforts in the Orient 1951, Finley traveled across the USA and around the world to champion the cause of indigenous missions. He helped to raise support for native missionary leaders in China, Korea, Japan, Taiwan, Philippines and India.

Bray stated: “His advocacy efforts were not always well-received by other post-war mission and denominational leaders. For years, I was most often among them. We wanted to restore the vast network of American and British missionary organizations in the former colonies – the ones which were driven out at the end of World War II by rising nationalism.”

However, Dr. Finley knew that the end of that colonial missions’ era had come – and the task of world evangelism was now ready to be taken over by national leaders who needed our support.

According to Bray, the three agencies he formed inspired hundreds of new native-led mission agencies and organizations in every country of the world. “His fundraising efforts and generosity helped radically change the course of all Christian mission boards – both traditional and indigenous.”

Among the many other agencies that were inspired by his vision were Campus Crusade and Gospel for Asia.

“I also served on the editorial staffs of both those organizations and saw how Dr. Finley inspired K.P. Yohannan and Bill Bright.  Scores of other groups were influenced by Dr. Bob, many of which have since become well-known brand names Protestant missions,” Bray said.

In 1989, Dr. Bob began calling and invited Bray to come to join him in Virginia at the headquarters of Christian Aid, and in 2000, Bray left Gospel for Asia and moved to Charlottesville with his young family.

“One of my first assignments included taking over the presidency of Overseas Students Mission for a couple years – but I was not interested in recruiting international students or new missionaries yet. Instead, I focused on communicating the far more exciting vision of organizations like Christian Aid and Hopegivers International in Rajasthan – helping to support thousands of native missions and leaders in India and almost every country of the world.

“However, Dr. Bob was patient and eventually persuaded me to take over my current assignment: recruiting and supporting the next generation of indigenous missionaries from among international students.”

Bray concluded: “He patiently pointed the way and enabled my struggling steps when I faltered. He was strong but never domineering and helped to reach the point where I am today. Without this apostolic ministry, I don’t know where I would be – and the same can be said for many others on every continent.”