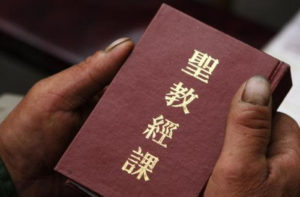 By Dominic Sputo, Lumenlife
Zion Church is Beijing’s largest house church with approximately 1,500 congregants in eight campuses. Today is their last worship service. China closes churches quietly, supposedly with legal grounds.
Five years ago, the church signed a 10-year lease and began investing in property renovations to fit its members’ needs.  But the property manager is now terminating their lease five years early — without cause in response to government pressure.
This could be the final blow to Zion Church, who, over the past five months, lost six other campuses after their property managers similarly succumbed to government pressure.  It also comes on the heels of news this week of another church in China that was demolished by 70 policemen supposedly to make way for “urban development.”

Unfortunately, religious persecution has been a government-ordained mandate in China since the indoctrination of Communism and atheism under Mao Zedong’s rule in the 1950s and 60s.  I weep for the persecuted who found themselves for decades at the mercy of such a brutal dictator.
And my heart aches for our Chinese brothers and sisters who will lose their place of worship and possible fellowship with their Christian community.  But Jesus has overcome the world, and China is a beautiful illustration of that.

Despite decades of abuse, persecution and government intimidation and repression, Christianity, more than any other religion, is exploding in China. And this movement, supported by house or underground churches, puts China on track to soon become the largest Christian country in the world. Praise God!

China thinks that closing buildings will stifle this growth, but by now they should come to realize that our Lord is bigger than that. Two thousand years of history proves that evil dictators can’t stop the Kingdom of God.

This reminds me of Psalm 37:12-13 which says “The wicked plot against the righteous and gnash their teeth at them; but the Lord laughs at the wicked, for he knows their day is coming.” (NIV)

I wonder what would happen if the U.S. government were to close our churches. Could we, would we deny ourselves and take up our cross and still follow Jesus?