Top Posts
Colorado football coach Sanders’ unabashed faith
There’s A Light That Enters Houses With No...
Knowing the One Who Always Keeps His Word
Pregnancy Resource Centers Fight For Life Amidst Opposition
This World is Not Our Home
Lessons Learned From a Gingerbread House
Let There Be Peace on Earth
‘I Wanna Dance’ movie: Whitney Houston’s success and...
Fact Finding, Sight Seeing, and Prayer Walking
Kidney donation led to 8 life-saving surgeries
Home ANS Feature ChinaAid’s Bob Fu testifies on “State of Religious Freedom Around the Globe”

WASHINGTON, DC (ANS) – Bob Fu, Founder and President of China Aid Association, told the the Tom Lantos Human Rights Commission Hearing on Religious Freedom Around the Globe that today, as the world witnesses the worst religious persecution seen in China since Mao’s Cultural Revolution in the 1960s, the rule of man has replaced the rule of law and rule by law.

Fu said that under China’s President Xi Jinping, each month during 2020 at the close of another decade, the Chinese Communist Party (CCP) intensified its religious persecution. 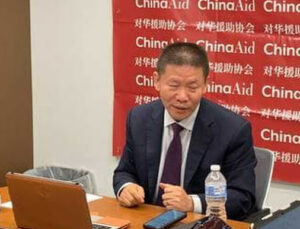 He said: “In 2018, under the direction of Chinese President Xi, China’s officials began the ‘Five-Year Plan for the Sinicization of Religion,’ designed to shape all religious faiths to become compatible with Communism. In the persecution against Christian communities for example, the CCP intends to bring Christianity under the full control of the government. As officials forced Christians in State-run churches, also called Three-Self Churches, to demolish their crosses, they also forced them to fly the Communist Party flag, sing Communist revolutionary songs, and listen to secondary sermons extolling the government from the church pulpit.”

Fu said ChinaAid’s research documented more than 10,000 persecution cases in 2018, 36 times greater than those recorded in 2017.

In 2018, research revealed more than 2,000 abuse cases, including physical, verbal, mental abuse and torture, five times more than in 2017.

Fu stated that as 2020 began a new decade, the novel Coronavirus, which initially broke out in Wuhan, raged throughout the world, causing many to “social distance” and “quarantine” themselves from others. CCP authorities, however, did not distance themselves from nor did they forgo persecuting Christians. Neither did they quarantine themselves from targeting those in mainland China who professed beliefs other than atheism. Instead, CCP authorities continued to increasingly persecute Christians, religious practitioners, and human rights activists.

ChinaAid’s research regarding persecution in China during 2020 confirmed the following trends:

⮚ In addition to demolishing churches, CCP authorities forcibly commandeered and repurposed an unknown number of churches and religious sites.

⮚ As CCP officials worked to more fully control “religion,” they ordered Christians in state-run, as well as in house churches, to fly the Chinese flag, and sing patriotic songs in services. Authorities directed ministers and priests to “Sinicize” sermons.

Fu went on to say that although China attempted to hide its role in Covid-19 , the truth revealed that the deadly virus initially spread in Wuhan. Similarly, even though the CCP tries to conceal the brutal reality about its ongoing, intensified religious persecution and human rights abuses, victims and their family members recount real-life, horrendous experiences.

ChinaAid’s research for 2020 confirms that China’s persecution of Christians and of those professing any belief again exceeded incidents reported for the previous year (2019). As suppressed facts have emerged from dark, secret places, the fallout from the CCP’s persecution, like results from the unchecked Covid-19 pandemic, present a potent, putrid threat to challenge the outside world to pay attention.

Control and Reform of Christianity

With 2020 as the third year of implementing the CCP’s “Five-Year Plan for the Sinicization of Christianity,” ChinaAid perceives the CCP’s persecution of Christianity and Christians as the well-rehearsed model for controlling religion in Xi Jinping’s New Era. This new era’s model, characterized by the ideology that “the CCP rules all” and the implementation of the Regulations on Religious Affairs in 2018, reveals the following trends and characteristics.

Alienating Christianity and Faith in Jesus

In China, the government has designated politics to command and lead religion, guiding Christianity and Christians to shift from “Obey the Lord, follow the Lord” to “Obey the Party, follow the Party.” Examples of this shift include:

1) in Henan Province, due to President Xi’s opposition to the first commandment, the Ten Commandments became “the Nine Commandments.”

2) The CCP’s version of the “Three Character Canon” appeared in Jiangxi Province to proclaim and promote the new Regulations on Religious Affairs.

3) CCP authorities forcibly removed images of Jesus or Mary in Christians’ homes and replaced them with President Xi’s photo.

4) Officials forcibly revised some churches’ worship service in Anhui Province, and at some churches in Henan Province, they posted pictures of Xi Jinping and Mao Zedong on the left and right sides of the cross, with a Chinese flag positioned next to them.

“Red” ideological logos and symbols replaced Christian and Jesus-related symbols, which manifested as the following:

Besides facilitating extensive cross demolitions, CCP authorities forced Christians to remove Christian folk artwork from their homes and forbid them to post Chinese New Year door banners with Christian messages. Officials ordered that Christians remove tiles and door banners with Christian messages from their doorways or paint over them with black paint. They ordered Christians to scratch out the word “Immanuel” posted on walls of their homes. Government authorities confiscated Christian books and publications. They forbid the printing and posting of images of Jesus.

The CCP exercised full control over Three-Self Churches in the name of standardizing management. This included religious activity sites, personnel, funding, and church activities. For example, authorities evaluated evangelists, and placed restrictions on the number allowed. The Party even monitored the method of evaluation, and the content of evangelists’ sermons. Party officials asked churches to create a plan for developing new converts. They installed surveillance cameras in and outside of churches. The Three-Self Church network of Henan Province further proposed “nine forbidden practices.”

The use of violence (beating, smashing, and robbing) dramatically rose, and included forcibly demolishing churches, some by dynamite. The CCP routinely and forcibly demolished crosses, setting some on fire. Authorities increasingly, forcibly outlawed and shut down churches, accompanied by raiding, searching, and smashing church buildings, and even openly burning Bibles.

The CCP perceives Christianity as an enemy

The CCP attempted to eliminate all house churches, including outlawing influential mega house churches across the nation, removing their presence on the internet, and forbidding evangelistic organizations from proclaiming the Gospel online. To exhaust churches financially, authorities required pilot house churches to either join the Three-Self Church or disband. In the name of “illegal religious activities,” they disqualified house church clergy for evangelism, and misappropriated fines and issued additional administrative penalties on house churches.

CCP authorities fostered a discriminatory and even anti-Christian social atmosphere by: (local governments in many places) forbidding the celebration of “foreign holidays,” particularly Christian holidays and mainly Christmas, and openly forbidding the sale of the Bible in online stores; forbidding citizens to believe in Christianity, which has extended from CCP members, civil servants, and military servicemen to non-CCP members and average citizens, and from inside the government system to outside the government system, and forcing people to sign a statement promising not to follow the Christian faith; dramatically increasing the range of people banned from churches, especially children; placing unprecedented restrictions on schools with a Christian background, forcibly suspending business operations with a Christian background, and imposing restrictions on Christians’ daily living; and discriminating against them in their access to social security, employment, and bank loans. This exposed a comprehensive persecution of Christians in economic, social, and cultural arenas.

The CCP [albeit futilely] attempted to wipe out the Christian faith, as evidenced by “forcing” adult believers to deny their faith and sign a statement promising not to practice it. Authorities even required schools and parents to make children give up their Christian beliefs. Officials also forbade children’s access to the Christian faith on all fronts and entirely deprived them of their right to believe in Christianity.

Regardless of China’s attempts to block information on persecution from reaching the outside world, ChinaAid’s research shows that religious oppression continues to increase with each passing year since 2017. As China advances its plan to Sinicize Christianity and other religions with forced indoctrination of Communism ideology, authorities all over the country are interfering with normal religious operations and arbitrarily detaining and arresting hundreds of thousands of religious believers purely for peacefully practicing their religious faith. Given the observed universality in which the CCP persecuted both officially sanctioned and independent religions and faiths, ChinaAid has concluded that the CCP’s war on religion will continue to grow unless the world intervenes.

** To hold the CCP’s “bad actors” accountable for their actions.

“ChinaAid and I urge the United States government to continue to implement and utilize the Global Magnitsky sanctions against the Chinese Communist Party members committing and delegating gross human rights abuses.

“This should include those who commit violations of freedom of religion and belief in Article 18 of The Universal Declaration of Human Rights. The United States government should continue to work with like minded countries in implementing bilateral sanctions like those announced in March 2021.”

Fu ended his remarks by stating: “I also urge Congress to quickly pass the Uyghur Forced Labor Prevention Act in order to confront the vast labor system put in place by the Chinese Communist Party that effectively profits off the genocide of an ethnic and religious minority.”

“In addition, U.S. Congress should raise the alarm considering the 2022 Winter Olympics hosted in Beijing, China. A country with as poor a human rights record and actively committing genocide should be disqualified from hosting international events such as Olympics. The United States should boycott the Beijing Olympics and call on other countries who adhere to universal values to do the same.

“It is equally important to show solidarity with victims of religious persecution by having members of Congress continue to meet with persecution survivors and adopt Chinese prisoners of conscience through the Defending Freedoms Project. In the Administration, President Biden and Vice President Harris should meet and host the victims of persecution and genocide in public at the White House and the United Nations in New York and Geneva.”