LAHORE, PAKISTAN (ANS) — Eleven Chinese nationals were remanded in jail in Lahore on May 13, following allegations that impoverished Pakistani girls are being trafficked to China as brides under false promises of a better life.

Barnabas Aid reported the arrests follow an undercover investigation by Pakistan’s Federal Investigation Agency (FIA) into claims that Christian and Muslim girls, some as young as 16, are forced into prostitution once in China, where they are unable to ask for help because of the language barrier.

The FIA has made 39 arrests, mostly of Chinese nationals, and recovered six girls. 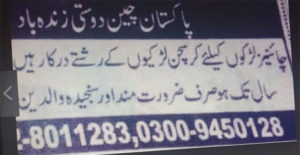 In cases involving Christian girls, the scammers have reportedly paid their impoverished parents several thousand dollars after falsely telling them that the waiting grooms are “wealthy Christian converts”. Some reports say the fraudsters are assisted by men claiming to be Christian pastors or Muslim clerics.

Saleem Iqbal, a Christian community activist in Lahore said, “The gang members normally tell Muslim families the Chinese suitor has recently converted to Islam, and to the Christians they say the Chinese men have converted to Christianity.”

China has sent a task force to Pakistan to help in the investigation. The Chinese embassy in Islamabad said, “China is working together with the Pakistani government and law enforcement agencies to track these illegal marriage centres.”

The scandal is similar to that exposed in Myanmar (Burma) where hundreds of young mainly Christian Kachin women were trafficked to China, sold as wives to Chinese men, then raped until they became pregnant. After giving birth, some were allowed back to Myanmar but were forced to leave their babies behind.

The market for foreign brides has grown in China because of the government’s former one-child policy that skewed the gender balance of the population toward males.