Top Posts
Colorado football coach Sanders’ unabashed faith
There’s A Light That Enters Houses With No...
Knowing the One Who Always Keeps His Word
Pregnancy Resource Centers Fight For Life Amidst Opposition
This World is Not Our Home
Lessons Learned From a Gingerbread House
Let There Be Peace on Earth
‘I Wanna Dance’ movie: Whitney Houston’s success and...
Fact Finding, Sight Seeing, and Prayer Walking
Kidney donation led to 8 life-saving surgeries
Home ANS ReportsCulture “Deal of the Century” Mid-East peace to unveil in Bahrain

“Deal of the Century” Mid-East peace to unveil in Bahrain

BAHRAIN (ANS) – The “Deal of the Century” Mid-East first phase peace initiative will be released in Bahrain.

The “Deal of the Century” peace initiative first phase focuses on a ‘Peace to Prosperity’ workshop in Bahrain to unveil first parts of Trump’s peace deal.

The Trump Administration will reveal the first phase of the much anticipated “Deal of the Century” in Bahrain towards the end of June, at an economic workshop called “Peace to Prosperity,” which underscores the close strategic partnership with the United States.

Mid-East ministry Behold Israel says the ‘Peace to Prosperity’ workshop will center on regional cooperation and economic reform and opportunity within the framework of the peace deal and will work towards a solution for a “brighter future” for the Palestinian people.

Both the White House and Bahrain announced the workshop on Sunday, the White House releasing a statement confirming the event, as well as giving more details into the first parts of President Trump’s deal. 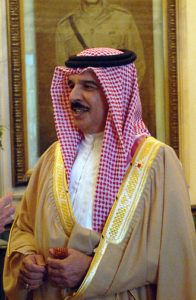 The statement reads, “The Kingdom of Bahrain, in partnership with the United States, will host the ‘Peace to Prosperity’ economic workshop in Manama on June 25 and June 26, 2019.  This workshop is a pivotal opportunity to convene government, civil society, and business leaders to share ideas, discuss strategies, and galvanize support for potential economic investments and initiatives that could be made possible by a peace agreement.”

The workshop is scheduled to “facilitate discussions on an ambitious, achievable vision and framework for a prosperous future for the Palestinian people and the region, including enhancements to economic governance, development of human capital, and facilitation of rapid private-sector growth,” that “If implemented, this vision has the potential to radically transform lives and put the region on a path toward a brighter future.”

A spokesman for the Palestinian Authority (PA) again reiterated their demand for statehood, responding to the White House’s announcement on Monday stating, “Any plan without a political horizon will not lead to peace.” The Palestinians are reportedly considering boycotting the conference if their demands are not met, in line with their ongoing boycott of the Trump Administration following its recognition of Jerusalem as Israel’s capital a little over a year ago. They insist on Palestinian statehood and recognition of East Jerusalem as independent from Israeli sovereignty.

Bahrain’s Minister of Finance and National Economy Shaikh Salman bin Khalifa Al Khalifa released the following statement alongside the White House on Tuesday, “The ‘Peace to Prosperity’ workshop underscores the close strategic partnership between the Kingdom of Bahrain and the United States, as well as the strong and shared interest in creating thriving economic opportunities that benefit the region.”

President Trump’s deal is set to focus on economic opportunity and reform for the Palestinians in cooperation with regional partners.

The White House has been clear that final decisions and agreements regarding borders or peace would be carried out by Israel and the PA.