Top Posts
Johnny Cash movie: His life, loves, challenges and...
A Walk of Faith Begins with a Step...
God is Rich in Mercy
Everyone has a Story to Share
‘Till’ movie: Racial murder helped spark civil rights...
Leaning His Head On Jesus, This Evangelist Hears...
Timing, common ground, and fruitfulness in witness
Step Out of the Traffic
In Support of Ukraine
Living an Imperfect, Unfinished Life
Home ANS Feature Death Threats for China Christian Freedom Campaigner

Orpington, England (ANS) – A leading campaigner for Christian freedom in China has received death threats and been hounded from his home, according to Release International.

Bob Fu is a former Tiananmen Square protester and partner of the UK-based charity, which supports persecuted Christians around the world. 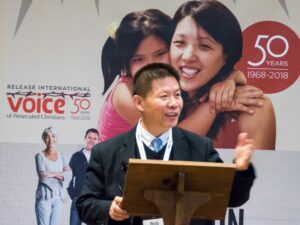 Fu and his family have been traumatised by bomb threats and protests that continued for weeks on his doorstep, but he insists his work at ChinaAid will continue.

Pastor Bob Fu says ChinaAid has been targeted for intimidation but will not be silenced. Instead, this taste of persecution on their doorstep is a wake-up call to the free world that will spur on the campaign for freedom of faith in China.

The threats are part of a bizarre campaign to target Chinese exiles in several countries. Activists, themselves mainly Chinese, have been filmed attacking and beating victims on the streets.

The mayor of Bob’s hometown in Texas told reporters: ‘There are people who want Bob Fu eliminated, who would like to see his life ended.’

Bob Fu says: ‘I have no doubt this is directly from Beijing. The goal is clear. It’s to silence my voice for freedom in China and to destroy the ministry of ChinaAid.’

But he insists: ‘We cannot let them stop us – it’s business as usual.’

The threats have taken a toll on his family. Fu’s 15-yr-old daughter had to be taken out of school by armed police. ‘The atmosphere was so tense – that caused stress, mentally and physically.’ The family are now back in their home under police protection.

Bob Fu was speaking about persecution in China in Washington DC when news broke that protesters had gathered outside his home in Midland, Texas. Bomb threats were made against his family, who had to be taken into protective custody.

‘The FBI deemed the threat very real and credible,’ says Fu. ‘So they quickly had to evacuate our whole family with fully armed protection.’

Fu says death threats have been made against him on multiple media platforms, since a campaign was launched by New-York based Chinese billionaire, Guo, also known as Miles Kwok. It’s been reported that the businessman fled China on corruption charges.

Guo has called on his supporters to launch a ‘global kill cheaters campaign’. That campaign has targeted Chinese in exile in several countries, claiming they are working for the Communist government.

In another video translated from Mandarin, Guo allegedly states: ‘We will fully support our comrades who take actions to kill those cheaters.’

A recent report on Canadian TV News showed footage of alleged activists beating up a Chinese human rights activist on the streets of Vancouver.

The protestors at Bob Fu’s house turned up on September 26, eventually forcing him and his family out of their home for six weeks. Four protesters have since been arrested for criminal trespass. The authorities believe they are being paid to demonstrate.

In one video, Guo allegedly states: ‘We will pay whatever money they spend and however long their campaign lasts.’

Holding placards and chanting, the protestors, who are mainly Chinese, denounced Bob Fu as working for the Communist Party.

An article on Guo’s GNews website describes Bob Fu as ‘a fake pastor’, a ‘leader of human trafficking’ and a ‘100 per cent hypocrite’.

ChinaAid is a long-term partner of UK-based Release International, whose CEO, Paul Robinson says, ‘I’ve known Bob personally for a long time. To say he is fake is like saying China doesn’t persecute Christians! The statements made against Bob Fu would be laughable if they hadn’t been accompanied by death threats.

‘Bob Fu is an outspoken champion of freedom of faith in China. And China doesn’t like that. We must ask ourselves whose interests are served in trying to silence this courageous campaigner and by attacking other Chinese dissidents in the free world. Release International stands with Bob Fu.’

The mayor of Midland, Bob Fu’s hometown, held a press conference to denounce the protesters as ‘communist agitators who have been making aggressive threats towards Fu, his family and ChinaAid.’ Threats were then made against the mayor, too.

In a subsequent news conference, Mayor Patrick Payton described the protests and threats as ‘attacking and terrorizing someone who the Chinese Communist Party under Xi’s leadership despise because of what a threat he [Bob Fu] is to who they are and what they do… There are people who want Bob Fu eliminated… There are multiple people who would like to see his life ended.’

Fu describes those threats as ‘domestic terrorism’ adding: ‘The goal is very clear. It’s to silence my voice for freedom in China and to destroy the ministry of ChinaAid. It is the Communist Party’s way to try to eliminate the voice for the voiceless in China.

‘But our work hasn’t stopped. It’s business as usual for ChinaAid. Our ministry of exposing persecution and encouraging and equipping leaders in China continues.

‘We have successfully rescued more than 100 families facing threat in China and we will continue to expose the persecution of the Communist Party against house church pastors and other minority groups.’

‘We see how the Lord has used this to wake up many in the free world. We see this as a blessing in disguise. This is not going to scare us. Freedom has a price, and this is the price we are proud to pay for our faith and for freedom.’

Asked what would happen to him if he were to return to China, Fu replies: ‘It would be a one-way ticket to a Communist Party prison, perhaps even a death sentence.’

Says Release International CEO Paul Robinson: ‘The fact that Bob Fu is a wanted man in China, coupled with his track record in defending persecuted Christians is a complete rebuttal to these ridiculous claims. Please pray for Bob, his family and ChinaAid at this time.’

Gifts that Keep on Giving: Being the Hands, and Feet, and Voice of Jesus

Leaning His Head On Jesus, This Evangelist Hears...