Top Posts
Knowing the One Who Always Keeps His Word
Pregnancy Resource Centers Fight For Life Amidst Opposition
This World is Not Our Home
Lessons Learned From a Gingerbread House
Let There Be Peace on Earth
‘I Wanna Dance’ movie: Whitney Houston’s success and...
Fact Finding, Sight Seeing, and Prayer Walking
Kidney donation led to 8 life-saving surgeries
The Power of Curiosity
When Love Came Down at Christmas
Home World Missions Dr. Robert ‘Bob’ Finley is with the Lord

Dr. Robert ‘Bob’ Finley is with the Lord

CHARLOTTESVILLE, VA (ANS) — Dr. Robert (Bob) V. Finley, who led a reformation in foreign missions and founded International Students, Inc. (ISI) and Christian Aid Mission, departed to be with Christ His Saviour on March 22, 2019, at the age of 96. 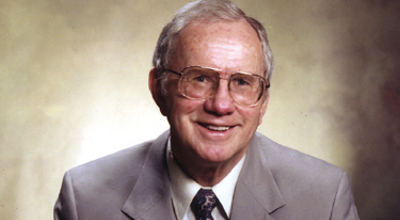 Born in Albemarle County, Virginia, Finley attended the University of Virginia where he served as undergraduate student body president, head of the Honor Committee, captain of the boxing team, and won the NCAA intercollegiate boxing championship in the middleweight division in 1944.  At the time of his graduation that year, Finley was recruited as an evangelist by Youth for Christ and InterVarsity Christian Fellowship.

Between 1945 and 1947, Finley spoke in universities, seminaries, Bible institutes, and churches throughout the United States and often shared the platform in large youth rallies with Billy Graham.

From 1948 to 1950, Finley spoke in evangelistic crusades throughout Asia, preaching with World Vision and Samaritan’s Purse founder, Bob Pierce, in South Korea.

While in Asia, Finley observed the effectiveness of indigenous Christians in reaching their own people with the gospel.  He also discovered that many of the most capable indigenous leaders had studied abroad.

He returned to the United States and, in 1953, founded International Students, Inc.  At the same time, he established the A.I.D. Division (Assisting Indigenous Development) of ISI which, in 1970, was spun off as Christian Aid Mission.

Among those whose early support was crucial to Finley were Billy Graham, Dawson Trotman, founder of the Navigators, and Donald Grey Barnhouse, pastor of Tenth Presbyterian Church in Philadelphia.

ISI and Christian Aid Mission created new paradigms in foreign missions.  ISI intentionally reached foreign students in America who were from countries closed to the gospel.  Christian Aid Mission was the first to support independent, indigenous, missionary ministries, assisting them to fulfill the vision God had given them to establish a witness for Christ in their nations.

Since its inception, the Christian Aid Mission has provided prayer and financial support to thousands of indigenous ministries based in lands of poverty or persecution.

“I am humbled to see God’s hand leading me to be an advocate for native missionaries,” Finley wrote in his autobiography, Apostolic Adventures. “I’ve seen these brave men and women who have sacrificed so much, sometimes their own lives, because of the call of God to reach their own people for Jesus Christ.”

Finley is fondly remembered by missionaries worldwide for his life and work, his books, articles, and his teaching.  He believed that it is the supreme responsibility of the disciples of our Lord Jesus Christ to plant and build His church among all nations.

“His character, knowledge of the Bible, and focus on the Great Commission have shaped my life, the lives of those who have worked alongside him in ministry, as well as hundreds of missionary leaders from overseas,” said his wife Cynthia Finley.

“Only eternity will reveal the full impact of the man called Bob Finley, who touched millions around the world through his unique vision,” said John Thannickal, an indigenous Christian leader in India.

An honorary doctorate degree was conferred on Finley in 1952 by Houghton College for his distinguished contributions to foreign missions.

“One of the greatest aspects of Dr. Finley’s work is that he trusts us,” said Resham Raj Poudel, the leader of an indigenous ministry in Nepal. “Christian Aid Mission is the first ministry I know to support independent gospel ministries with prayer and finances to help them fulfill their work. This made it possible for us to grow in the vision that the Lord has given us. The result is that many churches are being planted around the world.”

Along with his wife, Finley is survived by two daughters, Deborah Finley Arcieri and Ruth Finley Cassidy, three grandchildren, one great-grandchild, and two sisters.

Christian Aid Mission seeks to establish a witness for Christ in every nation by assisting indigenous ministries based in areas of poverty and persecution, giving priority to ministries sharing the gospel of Jesus Christ with unreached people groups.  To learn more about Christian Aid Mission, visit our website https://www.christianaid.org/