Top Posts
Colorado football coach Sanders’ unabashed faith
There’s A Light That Enters Houses With No...
Knowing the One Who Always Keeps His Word
Pregnancy Resource Centers Fight For Life Amidst Opposition
This World is Not Our Home
Lessons Learned From a Gingerbread House
Let There Be Peace on Earth
‘I Wanna Dance’ movie: Whitney Houston’s success and...
Fact Finding, Sight Seeing, and Prayer Walking
Kidney donation led to 8 life-saving surgeries
Home World Missions Drought and Death are Frequent Visitors to those Without Water

Drought and Death are Frequent Visitors to those Without Water

WILLS POINT, TEXAS (ANS) — Every March through May, drought settled in Vimal’s area, an agrarian village where most of the locals were farmers, relying on small ponds to irrigate their fields and sustain their livestock, exasperating their water crisis by drying up the small ponds and turning the fields to dust.

No longer able to water their cattle in the little streams and ponds in the fields, Vimal and the other farmers of the village brought their livestock to join the women and children at the well, swelling the line waiting for water.

Bickering often broke out in these long lines because villagers were convinced their own needs were greatest. During the dry season, there was not enough water to go around, and villagers had to forgo bathing and limit cooking. The lack of access to clean water filled the village with tension and illness. 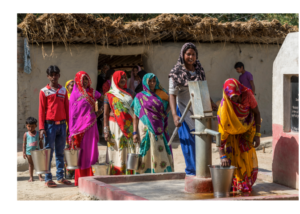 Several years ago, Vimal’s relative became sick because of the unsafe water coming from the well.

“[My relative] complained of stomach pain,” Vimal shared. “He suffered for more than two months, and the problem started to grow even worse. After two months, he passed away because of stomach pain and, I believe … consuming unsafe water.”

Other families suffered loss too. A young boy around 5-years-old developed severe diarrhea because of the contaminated water. Not having a hospital close by, the family had to wait until the next morning to see a doctor. The boy was too sick, and the doctors were not able to help him. He passed away.

These difficulties soaked into the fabric of the community, infusing it with a great sense of need.

The First Drops of Hope

Pastor Bharit began ministering in Vimal’s village, praying for people and sharing God’s love. He knew the troubles of this community intimately because he grew up there. He brought comfort to deathbeds and encouragement to the weary.

Vimal became the first in his village to join Pastor Bharit in worship and prayer. As Vimal’s heart for the Lord grew, so did his burden for his community. He began asking God to provide good, clean drinking water for the village. As Pastor Bharit’s congregation grew, they joined Vimal in praying for abundant, safe water, trusting God to take care of them in their crisis.

After years of praying to the Living Water to provide the daily water they needed, Vimal’s village was scheduled to have a ‘Jesus Well’ drilled. Vimal was thrilled.

“It was such a blessing that the Lord answered our prayers and gave us this Jesus Well in our village,” shares Vimal. “I was so happy.”

As the congregation, which had grown to more than 100 people, began planning for the ‘Jesus Well’, they looked for the best place to put it. They wanted a good location that would be convenient to all the villagers, eliminating the several miles traveled each morning and evening to fetch water.

Vimal’s neighbor heard about the planned ‘Jesus Well.’ Though not a member of Pastor Bharit’s congregation, he donated a portion of his land for the well. Being alongside the road in a central location, it was the perfect spot.

“Because of this Jesus Well we are helped so much,” Vimal says. “My family doesn’t have to walk a far distance … Now the time [spent] fetching water can be invested in any other work.”

The health of the community has improved tremendously. When the ‘Jesus Well’ was first installed, the community had it tested, at the direction of the local authority, for safety. After testing the water in a lab, the report came back that the water was very pure and safe to drink.

Because of the depth that the Jesus Well was drilled, it did not run dry—even deep into the drought season. The fresh clean water was available to the villagers year-round, right on the roadside in the middle of town.

Blessings Flow to Nearby Villages

Word spread to other villages about the pure water available from the ‘Jesus Well’, and people now travel several miles to get water from Vimal’s village. As Vimal sees the needs beyond his village, he has begun praying for more Jesus Wells for surrounding communities, so everyone can share in God’s blessings.

“Please pray for several other villages that are going through water crisis,” Vimal shares, “that we will be able to install a ‘Jesus Well’ like this, in such places … Pray that through this Jesus Well many will see how God loves them and they will experience … God’s faithfulness and God’s loving kindness.”