Top Posts
Knowing the One Who Always Keeps His Word
Pregnancy Resource Centers Fight For Life Amidst Opposition
This World is Not Our Home
Lessons Learned From a Gingerbread House
Let There Be Peace on Earth
‘I Wanna Dance’ movie: Whitney Houston’s success and...
Fact Finding, Sight Seeing, and Prayer Walking
Kidney donation led to 8 life-saving surgeries
The Power of Curiosity
When Love Came Down at Christmas
Home World MissionsPersecution Egypt PM: worship places not to be “disposed of ”

Egypt PM: worship places not to be “disposed of ”

CAIRO, EGYPT (ANS) — Churches and church affiliated buildings licensed for worship in Egypt cannot be “disposed of” or used in any other way, ruled Prime Minister Mustafa Madbouli on July 1 when another 127 church buildings were granted legal status. 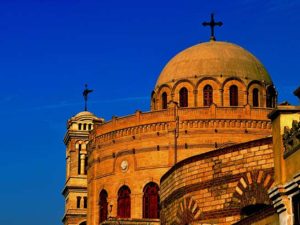 A church building in Egypt

BarnabasAid reports the new batch of approvals by the cabinet-approved committee brings the total number of church buildings licensed under the new Law for Building and Restoring Churches to 1,021.

Ottoman-era restrictions on church buildings were repealed in 2016, but long licensing processing times mean many congregations are still having to worship illegally in unregistered buildings.

Progress seems to be have been gaining pace since April when Madbouli told the committee overseeing the process to speed up the work it began in 2017 and clear the backlog of unlicensed church buildings as soon as possible.