Top Posts
When Love Came Down at Christmas
A Walk of Faith Begins with a Step...
God is Rich in Mercy
Everyone has a Story to Share
‘Till’ movie: Racial murder helped spark civil rights...
Leaning His Head On Jesus, This Evangelist Hears...
Timing, common ground, and fruitfulness in witness
Step Out of the Traffic
In Support of Ukraine
Living an Imperfect, Unfinished Life
Home ANS Feature Eritrea Frees Christian Prisoners But Attacks Churches in Tigray

Orpington, England (ANS) – More Christian prisoners of faith have been set free in Eritrea, according to Release International.  The charity reports a further 21 women prisoners have been released, making 171 Christians freed since August last year. 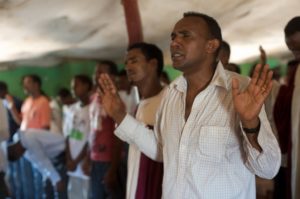 At the same time, Eritrean forces have been accused of attacking churches in neighbouring Ethiopia – killing more than 700 civilians in what has been described as a massacre.

‘Despite the prisoner releases in Eritrea, these horrific church attacks suggest it’s far too soon to suggest a change of heart towards Christianity,’ says Paul Robinson of Release International, which supports persecuted Christians worldwide.

‘The attacks on churches in Tigray are appalling, and Eritrea continues to hold many senior pastors who have been detained indefinitely – some for up to 17 years. Until all are set free and the killing of Christians stops it’s too soon to talk of lasting change.

‘Any such change would have to be proven by giving full freedom of religion to all Eritrea’s citizens.’

The latest prisoners to be released have just set free from Dahlak Archipelago, an island prison on the Red Sea. The women, reportedly young mothers, were arrested in 2017 after the Eritrean authorities raided underground churches in various towns and villages. Many of their husbands were conscripts and their children were left without care.

The latest batch of releases leaves an estimated 130 Christian prisoners in state jails in Eritrea. There is also an unknown number of army conscripts who have been locked up for practising their faith. It is estimated a further 150 Christian prisoners are being held by the army, but little is known about them.

Eritrea outlawed most religions in 2002 when the government banned every faith other than Orthodox, Catholic, Evangelical Lutheran and Sunni Islam.

‘Our partners say the latest prisoner releases may be to curry favour with the Prime Minister of Ethiopia, who is a Christian,’ says Paul Robinson. ‘Eritrea has joined forces with Ethiopia in its fight against Tigrayan rebels in the north of the country. Our partners believe Eritrea is trying to extend its influence in the Horn of Africa.’

Tigrayans and other ethnic groups are calling for greater autonomy from Ethiopia. But the government fears ethnic divisions could lead to the break-up of the country. Ethiopia, which is militarily weak, turned to Eritrea for support to launch an attack against Tigray in November 2020.

That conflict has seen armed attacks against churches and civilians. They include a massacre in the sacred city of Axum killing up to 800, including many priests and church members. Ethiopia claims the Church of St Mary of Zion in Axum is home to the Ark of the Covenant, which held the Ten Commandments.

Eritrea has denied involvement in the fighting in Tigray, but reports say some troops in Axum identified themselves as Eritrean. Forces from Eritrea are also claimed to be hoisting their flag and distributing Eritrean identity cards to Ethiopians under their control.

There have been other documented attacks on churches in the region. According to unverified claims by Tigrayan activists, more than 1,000 priests have been killed in the violence.

Many Christians who fled to escape persecution in Eritrea are now being caught up in the growing conflict.

Christians in refugee camps have been displaced again in the fighting. Soldiers have damaged several camps, including Shimelba, which has taken many Christian refugees from Eritrea. A number of Christians have died fleeing the violence in the camps.

Release International partner Dr Berhane Asmelash has been in touch with some of the Christian refugees. He says, ‘Most of them made it all the way to Addis Ababa [the capital of Ethiopia]. Some have moved to other camps.’

But given the latest prisoner releases in Eritrea, why are Eritrean forces now targeting Christians in the conflict in Tigray?

The attacks on the Church in Tigray represent an attack on culture rather than faith, believes Dr Asmelash. Those attacks are motivated by a desire to control the population by destroying their authority structures.

‘Religion is power. Every village has a church. The church is the centre of the community. Remove the church and the community will be left without leaders,’ says Dr Asmelash. ‘The Eritreans believe if they kill the priests and leaders, they can easily manipulate the people. So wherever they go, if they see a priest they will kill him.’

The Ethiopian Orthodox Church is one of the world’s oldest. Christianity came to the region in the 4th century. Tigray is known for its churches, monasteries and ancient bibles, some of them 1,000 years old.

The United Nations is warning of a humanitarian crisis, and observers fear the conflict could escalate into a regional war, drawing in Somalia and Sudan. Some fear it could destabilise the entire Horn of Africa.

The conflict has killed around 100,000 and displaced hundreds of thousands more.