SPAIN (ANS) — After more than three decades of work, the Bible in the Asturian language, spoken by around 200,000 people in northern Spain, is a reality.

Daniel Hofkamp , Evangelical Focus, https://evangelicalfocus.com/culture/11186/first-complete-bible-in-asturian-language-published reports  the first translation of the Bible into the Asturian language was published last March and it was presented April 21st at the Royal Institute of Asturian Studies (RIDEA).

Evangelical Focus reports the event had a limited in-person audience due to restrictions, and was broadcast on the Spanish Bible Society’s YouTube channel. 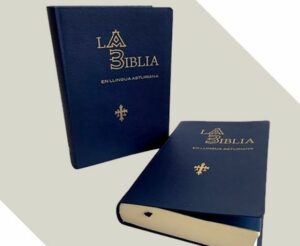 Cover of the first Bible in the Asturian language. Spanish Bible Society.

Authorities participated in the presentation of the Bible, including the regional Minister of Culture, Language policy and Tourism, Berta Piñán, who spoke about the cultural significance of the Asturian version; the former director of the Spanish Bible Society and coordinator of the project, José Luis Andavert; the coordinator of translations of the Bible Society, Ricardo Moraleja; and the consultant and linguistic and literary reviewer of the project, Ramón d’Andrés.

There were also representatives of the evangelical and Catholic communities, which have collaborated throughout the development of the translation and revision of this interdenominational Bible.

Asturian is mainly spoken in the region of Asturias, in northern Spain, but there are also minorities in the Spanish regions of Leon and Cantabria, as well as in Portugal, who speak the language.

According to the last official state data of 2018, about 200,000 people speak the Asturian language.

According to Ricardo Moraleja, the project has been “arduous” but “gratifying.” “Of all the projects I have had the privilege of working on, perhaps the Bible in Asturian is one of the most complicated,” he told Spanish news website Protestante Digital.

The complications have gone from the lack of economic resources to the loss of people in the work team due to death. Furthermore, “The Asturian language is in a phase of linguistic normalization,” so that it was difficult “to get translators and linguists to agree,” he added.

“It was also difficult to find people with training in Asturian and Hebrew. We had to teach Hebrew to Asturian linguists, so that they could carry out the translation,” explained Moraleja. 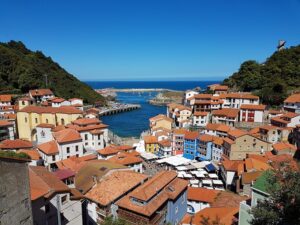 Religious organizations, such as the Evangelical Council of Asturias and the Archbishopric, social and educational institutions, including the University of Oviedo, and state entities, the Academy of the Asturian Language and the Regional Ministry of Linguistic Policy — have worked hand in hand.

“More than 20 or 30 people from several backgrounds and sensibilities have participated directly: seminaries, universities and secondary school teachers, writers, theologians, pastors have shared their knowledge as reviewers and consultants, creating a work of literary quality and religious sensitivity, with no precedent in Asturias,” stressed Moraleja.

The translation of the Bible in Asturian follows the dynamic equivalence method, which makes the text faithful to the originals and understandable and close to the colloquial use of the language.

Cover of the first Bible in the Asturian language. Spanish Bible Society.