NEW DELHI, INDIA (ANS) – Five Indian Christian families in a village in Jharkhand state, India are punished for becoming Christians by being deprived of food and water.

The Indian Christian village families were prohibited from working on their farms or walking on the main road before district authorities this month revoked the order, sources said, according to Morning Star News. 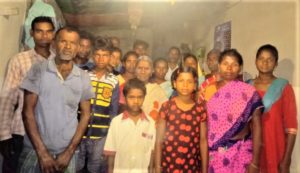 Leaders of Banhardi village, in Jharkhand state’s Latehar District, told the five families in April to either convert back to their ancestral Sarna religion or face punishment, Christian leaders said. When the Christians refused to renounce their faith, the village on April 10 issued a decree instructing that their farmland be confiscated and prohibiting them from interacting with anyone, fetching water and buying or selling, they said.

Before district officials arrived on May 13 and annulled the April 10 decree, the Christians had to go outside the village to look for food and other items to meet daily needs and were on the verge of starvation, said Motilal Oraon, one of the persecuted Christians.

“We had to carry drinking water from some other village to our homes,” Oraon told Morning Star News. “They did not allow us to enter our own farmland or work in it. We went searching for work in somebody else’s farmland in a distant village, as we could not find work in our own village. Our families were starving.”

After District Collector Rajiv Kumar intervened and annulled the order, the villagers agreed to let the Christians receive government rations and water, but they said they will continue to refuse to associate with all who have converted to Christianity, area pastors said. The villagers also said that they will forbid any Christian preacher from entering the village.

Along with Motilal Oraon’s family, the other Christian families punished were those of Madhwari Oraon, Banarasi Oraon, Lukku Oraon and Rajesh Lohara.

Sarna, also called Saranaism, is recognized as the indigenous religion of Adivasi tribes in eastern India. All Banhardi villagers followed the Sarna tradition of their ancestors until one family put their faith in Christ eight years ago, said Asaf Surin, senior pastor of the main Believers Eastern Church in Bariatu Jagir, 12 miles away. Gradually, four other families followed, he said.

“These five families are the only Christian families in the village of about 500 homes, and they attend worship at a small fellowship belonging to the Believers Eastern Church,” Pastor Surin said. “The fellowship meets at the house of a Christian about a mile away from Banhardi in village Riche, jointly with five Christian families of Riche.”

Beneswar Oraon, pastor of an area Believers Eastern Church, said that retaliation to this extent was unprecedented.
“Initially there was no persecution until 2016, but then the villagers noticed the increase in the number of families turning to Christ,” Pastor Oraon told Morning Star News. “They got together and discussed their concern, saying that if they did not stop Christianity from spreading, the whole village will soon become Christian.”

Morning Star News reporteds that more than 30 families attended the village meeting on April 10 in which they decreed that land owned by the Christians be confiscated and distributed among their non-Christian relatives; the Christians would not be invited to any marriage ceremony in the village or be allowed at any funeral; any villager found taking part in or attending any function in Christians homes would have to pay a fine of 1,000 rupees (US$14); and the Christians’ grocery ration card under the government distribution program, and all women’s self-help group memberships, would be cancelled.

“While the Christians where helplessly struggling to meet the basic needs of their families, Newswing [a local newspaper] published the news of this boycott, which then caught the attention of the authorities,” Pastor Surin said.

District Collector Kumar, along with an investigation team, reached the village on May 13 and initiated talks between both parties, the pastors said. He then ordered that all the local leaders’ decisions be annulled.

Sub-Divisional Police Officer Virendra Ram, who headed an investigating team, instructed the villagers to follow their own religion and let the five families practice their faith. Police also said that everyone could equally access government rations.

After the visit from the district authorities on May 13, the ration distributor approached the Christians on May 15 and insisted that they collect their share of the ration allotted for them.

“We are so delighted at the way God has heard our prayers,” Motilal Oraon said. “We got help even when we had approached nobody. God opened a way, and the authorities themselves walked inside our village and rescued us from starvation.”
Jharkhand’s population is 26.3 percent tribal, of which 14.5 percent follow Christianity, 39.8 percent Hinduism, 0.4 percent Islam and the rest other ancestral religions including Sarna, according to the 2001 census.