Top Posts
Colorado football coach Sanders’ unabashed faith
There’s A Light That Enters Houses With No...
Knowing the One Who Always Keeps His Word
Pregnancy Resource Centers Fight For Life Amidst Opposition
This World is Not Our Home
Lessons Learned From a Gingerbread House
Let There Be Peace on Earth
‘I Wanna Dance’ movie: Whitney Houston’s success and...
Fact Finding, Sight Seeing, and Prayer Walking
Kidney donation led to 8 life-saving surgeries
Home ANS Reports Four Christians in Iran Ordered to Begin Prison Sentences

New Malden, England (ANS) – According to CSW’s sources four Iranian Christians have been instructed by the authorities to present themselves at Evin prison in Tehran to begin serving five-year sentences. 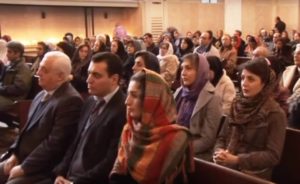 CSW reports that Hossein Kadivar, Khalil Dehghanpour, Kamal Naamanian and Mohammed Vafadar were arrested by members of the Islamic Revolutionary Guard in early 2019 during a series of police raids on house churches in Rasht. Five other Christians who were arrested at the same time have already begun serving their sentences, including Pastor Matthias Haghnejad.

During a court hearing on 24 July 2019, Judge Mohammed Moghisheh, who is notorious for miscarriages of justice, called the four men “apostates” and argued that the Bible was “falsified.” During another hearing on 23 September, the defendants’ lawyer was allowed to speak briefly;  however, Judge Mogisheh is reported not to have responded to his statement. The men were subsequently sentenced to five years in prison for “endangering state security” and “promoting Zionism.”

CSW’s Chief Executive Mervyn Thomas said: “CSW condemns the decision to send these innocent men to prison. The charges levelled against them are without substance, and their trial lacked transparency. We urge the Iranian authorities to immediately and unconditionally release them, and all others who are currently detained on excessive charges relating to their faith. We also call upon the Iranian administration, as a signatory to the International Covenant on Civil and Political Rights, to lift all restrictions imposed on freedom of religion or belief, and end its criminalisation of Christianity.”