Loves Park, USA (ANS) – A U.S. organization is aiming to help 1,300 “frontline pastors” and ministry workers in Russia and the former Soviet Union this winter who, it says, are “risking everything” to aid orphans, widows, and suffering families.

During the pandemic, local pastors across Russia and the former Soviet Union have trekked hundreds of miles on foot — often in remote areas and brutal weather — to deliver food, medicines, and Bibles door-to-door, and “share God’s love,” says Slavic Gospel Association (SGA, www.sga.org).

In eastern Russia — close to the Arctic Circle — Pastor Yegor helped anxious villagers during a raging forest fire that threatened their homes and lives. Several members of his church joined the volunteer firefighters, and Christian medics provided care at the scene.

“That’s why we call them ‘frontline pastors’,” said SGA president Michael Johnson, who just visited Russia and neighboring Ukraine, where several local pastors partnering with SGA serve in a war zone. “These pastors are risking everything to serve their communities — even their own safety and lives.” 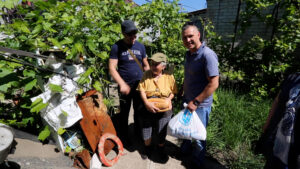 The Illinois-based organization aims to raise $130,000 to help 1,300 local pastors and ministry workers — like Pastor Yegor — get through the harsh winter months, when many face poverty, hunger, and bone-freezing conditions. In Siberia, Russia, temperatures in January can plummet to minus 60 degrees Fahrenheit — or even lower.

Compassion for the ‘Forgotten’

“Right now, despite their own hardships, pastors across the former Soviet Union are sharing their faith and the compassion of Christ with the broken and the forgotten, including addicts, widows, orphans, and those traumatized by war,” Johnson said.

“Urgent aid will arrive just in time for the winter,” he said. “Frontline pastors, ministry workers, and their families — who always put others’ needs ahead of their own — will receive gifts from SGA to buy food, get medical treatments they desperately need, and purchase winter boots for their children.”

“Frontline pastors” include Alexander Sheleg and his wife, who’ve adopted nine orphaned children — and many other local pastors like him who work multiple jobs to help feed orphans and others in need. Across the former Soviet Union, there are 700,000 orphans and unwanted children — equal to the entire population of Boston.

In the summer, as severe drought devastated vast areas of Kazakhstan — a former Soviet republic in Central Asia — local pastors and their churches gave sacrificially to help feed hungry families, while also offering them Christian literature in the Kazakh language.

Local pastors shared the “good news” with those whose hope had dried up. “One of them — Pastor Albert — was able to bring the hope of Christ to a young mother-of-two who recently lost her unborn child,” Johnson said.

Love in a War Zone

Other pastors serve in war zones — such as Armenia, Azerbaijan, and Ukraine — where conflict has left widespread suffering and trauma. Pastor Sergei Alexeev is one example — moving his young family into a war zone in eastern Ukraine so they can “minister to families and show them God’s love is real,” said Johnson, whose organization partners directly with local evangelical churches and pastors.

“These frontline pastors — who’ve sometimes lost their own sons, daughters, and homes in war zones — comfort their neighbors, pray with them, and share the love of Christ with them in ways that speak much louder than words,” he said.

Going to Jesus First, Instead of the Witch Doctor