Top Posts
Colorado football coach Sanders’ unabashed faith
There’s A Light That Enters Houses With No...
Knowing the One Who Always Keeps His Word
Pregnancy Resource Centers Fight For Life Amidst Opposition
This World is Not Our Home
Lessons Learned From a Gingerbread House
Let There Be Peace on Earth
‘I Wanna Dance’ movie: Whitney Houston’s success and...
Fact Finding, Sight Seeing, and Prayer Walking
Kidney donation led to 8 life-saving surgeries
Home ANS Feature Gathering of Nations: A Time to Cry, a Time To Celebrate

ALBUQUERQUE, NEW MEXICO (ANS)- The Gathering of Nations is America’s largest Native American Pow-Wow.  Thousands of indigenous people—from Canada, US, and the world—descend upon Albuquerque every April to dance, celebrate, and tout the amazing talent manifest in the various tribes. 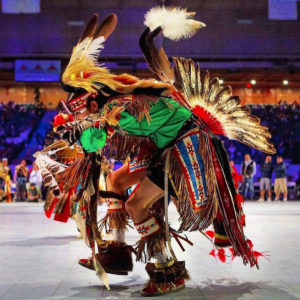 This year’s event was the thirty-fifth annual gathering.  As the 2019 press release describes: “Considered the most prominent, popular and legendary Native American event in the North America, the Gathering of Nations Pow Wow will host tens of thousands of people and more than 750 tribes from throughout the United States, Canada, and around the world.  The three-day festival will include more than 3,000 traditional Native American singers and dancers competing for prizes, and more than 800 Native artisans, craftsmen and traders displaying and selling their work in the expanded Indian Traders Market.  In addition, contemporary indigenous and other music groups will be performing a wide variety of musical genres on Stage 49…As one of the largest and most prestigious cultural pageants, Native American and indigenous women will represent and present their tribal and traditions.   The contestants will compete in the areas of tribal knowledge through interviews, essays, public speaking and traditional presentation, and dance.”

In the end, the Gathering of Nations strives “to be a positive cultural, spiritual and entertaining experience that is exhilarating for all who attend.”

I’ve heard about the Gathering for years, usually with glowing reviews.  But I had no idea of the emotional impact it would have until the first time I attended several years ago.

After walking through the array of vendors, I sat down to watch the grand entrance.

What started off with roughly 20 Native dancers- in full regalia- turned into hundreds and hundreds of dancers.  Each individual dancer represented his or her tribe in unique dress and color; each member danced, walked, and stood with pride as the gathering grew in number and strength.

As the dance commenced, singers and drummers from various tribes sang traditional songs in drum circles.  Undoubtedly, some were religiously based, others, possibly, folk-tunes from their clan.

I admit that I got teary-eyed during the entrance and dance.  I sat in awe as dancers filed into the arena at Tingley Colosseum.

I couldn’t agree more with the press release:  the expereince was positive. 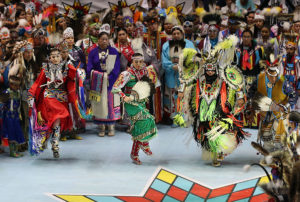 As each line of dancers entered the stadium, thoughts began to enter my mind:  are these the last of some of the tribal members?  What will become of the culture and life of many of the ethnic groups represented?

And then, in a moment of somber regret, I thought:  what did America do to many of these tribes, with our broken promises and consistent warfare?

Further, as a Christian, I had to ask myself: how have we represented Christ to our Native friends—both historically and today?  Not very well, I’m afraid. In some historical cases, such as William Penn, our Christian witness was strong.  Sadly, with other leaders, such as Andrew Jackson, our witness was lacking in Christian love, mercy, and respect.

I have many Native friends who are so thankful for the arrival of the message of Christ.  Jesus has brought hope to many people of Native descent.  They love and follow Jesus to the best of their ability, telling others about His life, death, and resurrection, yearning to follow in the “Jesus way.”

Solemn thoughts, to be sure! 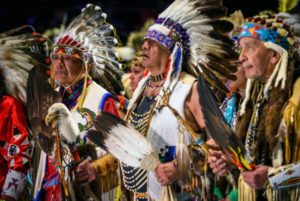 What is a nation like the US, or a faith, such as Christianity, to do in situations where abuse has been inflicted upon a people, sometimes in the name of the One we purport to follow?

Though I do not have all the answers, I suggest three concrete steps.

First, each individual needs to seek God for guidance on the condition of our own heart.  True, much of the history occurred hundreds of years ago- something we had little input or interaction with.  But how do we deal with the ramifications of the injustice today?  How will we help make things right?

Second, a public apology, an act of asking for forgiveness, is in store; both from the various religious groups, and, continually, from American leadership.

Several years back a Quaker group from Lancaster, PA, apologized to local Native Americans. In 2008, the Canadian Prime Minister apologized to the Indigenous people of Canada for  abuses inflicted upon the First Nation’s people.  And here in America, President Obama singed the Native American Apology Resolution on December 19, 2009, taking the first steps to rectify the wrong inflicted upon the Native populations of the United States.

Baby steps. And though many are taking appropriate actions, we must continually extend a hand of forgiveness and a heart of humility to assist our fellow Americans, when needed.

Which leads me to my third point: we must continually act on behalf of Native people, both politically (providing essential services afforded to all Americans) and culturally (ensuring Native culture is not eradicated).

First, because the physical ailments on the various reservations have not gone away, and in some cases, have increased.  Widespread poverty, rising health concerns (such as diabetes and AIDS), and with some tribes, basic necessities such as running water or internet access is denied to thousands of Americans.  Like all Americans, they need the services provided for continual support

I have seen this first hand, touring various reservations and speaking with my various Native American friends.  These are not fabrications; they are everyday realities.

Second, we need to ensure the culture of the various people are respected and encouraged.

My Navajo pastor friend, Landoll Benally, likes to draw a distinction between culture and tradition for Native people, especially the Christians within each tribe.  He feels that there is a difference between the culture of people, and the tradition or religion of the people.

For Benally, it is essential to keep the culture—such as sheep shearing, silversmith work, blanket weaving, language, pottery, and the folk music- for the Navajo, intact. But it is not essential for the Christian Native to keep the traditional religion of the people.  For Benally, new life-and food- has been found, so no need to let the sheep graze on older, unproductive fields.

Some may disagree, but the point is that—on some level—the culture must be kept intact and encouraged as an important fabric to our National identity and historic tapestry of people from the nations of the America’s.

All food for thought.

As I sat watching the various activities of the day at the Gathering of Nations:  Dances by an amazing Apache dancers, singers, and the craftsmanship of artists, I welled with gratification at the thought that one day I will be dancing with many of these people in God’s kingdom, thankful that the Lord has enriched His world with such diversity of people to honor and glorify Him.