Top Posts
Knowing the One Who Always Keeps His Word
Pregnancy Resource Centers Fight For Life Amidst Opposition
This World is Not Our Home
Lessons Learned From a Gingerbread House
Let There Be Peace on Earth
‘I Wanna Dance’ movie: Whitney Houston’s success and...
Fact Finding, Sight Seeing, and Prayer Walking
Kidney donation led to 8 life-saving surgeries
The Power of Curiosity
When Love Came Down at Christmas
Home World MissionsPersecution How renewed rocket fire affects local Israeli believers

TEL AVIV, ISRAEL (ANS) — Since Monday morning (March 25), rockets have been launched from the Gaza Strip into Israel, the first one hitting the coastal city of Netanya which is north of Tel Aviv, a distance of about 120 km, according to Kehila News.

“This was followed by a barrage of more attacks throughout Monday night and Tuesday morning,” the news outlet said on its website in an article by Cookie Schwaeber-Issan, the former managing director of Makor HaTikvah Messianic School in Jerusalem.

Kehila News Israel contacted a number of congregational leaders, both in Netanya as well as near the Gaza Strip to get their reactions on these new disturbing developments. 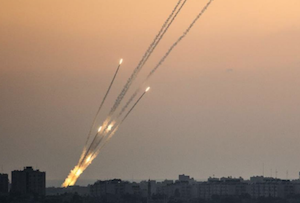 Rockets fired from Gaza into Israel in a previous attack.

In Jerusalem, Eugene Mitrea, Sar Shalom congregational leader, said: “We have two families in Ashkelon that are part of our congregation in Jerusalem. They both have ten children. It is not easy for them every time the alarm sounds, having to run to the shelter…I think it’s ridiculous how Israel — a world power in many areas — allows Hamas to call the shots and terrorize more and more people in our country. We hope and pray our leaders would deal with them once and for all.”

From Beer Sheva, Howard Bass, congregational leader at Nachalat Yeshua, said:  “Of course, it’s always worrying when the ‘conflict’ breaks out and begins to escalate, with rockets being fired at cities, towns, kibbutzim — especially for those living right near the border with Gaza.

“There are also believers in those areas, and I praise God for their fortitude and faith to remain living where they do for the sake of the gospel and the Kingdom of God. It is the beginning of Spring, ‘when kings go out to war.’ Beer Sheva is not exempt, and our night may not go uninterrupted. Yet the message that we have from the Lord is to pray for a change of heart and mind of those who oppose Him and His people and His land, that they repent and believe the gospel and come to salvation. When this happens, then even these enemies can be used by Yeshua to stop seeking Israel’s destruction, but rather show mercy to her and tell the Jewish people and the nation how Yeshua changed their hearts and lives to love them!

“Only a Holy Spirit encounter can accomplish this. Our challenge is to love our enemies, even as we want our country’s political and military leaders to do what is right to protect its borders and population.”

Michael Biner, congregational leader at City of Life Messianic Congregation, Sderot (a border town near Gaza) told Kehila News: “Many members of our congregation especially suffer from these rocket attacks as we live so close to Gaza, but our faith sustains us through it all. Our prayers have been answered so many times, and we have seen incredible miracles take place. For example, a rocket fell in a public preschool kindergarten play area at 11 p.m. at night. Had that occurred during the daytime, countless mothers and young children could have been killed. I remember a rocket falling just 20 meters from my own window. A couple of more meters, and it would have landed in our living room. There is no question the Lord has protected us. We continue to pray and believe that God is faithfully watching over us.”

David Loden, former congregational leader at Beit Asaph, Netanya, told the news outlet: “I heard the sirens in the night… they actually woke me up, even though they were several kilometers away. We have a siren right next to our house, and when it goes off… the dead rise!! It was not going off – only those far-away ones! So I went back to sleep thinking it must be a test or something. It was a shock to learn in the morning that there was a real attack, and with devastating results as well! I am retired from active participation in our Netanya congregation, but here in the house, which is a duplex together with another couple, we are embarking on a program of preparing our somewhat neglected bomb shelter for use.”

“We just finished celebrating Purim,” said Ya’acov, from Ashkelon. “As with most Jewish holidays the theme is the same; ‘they tried to kill us, we won, let’s eat’ Sadly that has not been the case with Gaza, he said.

“We have fought three wars with this enemy and have yet to have a victory. No, instead the saga has been; ‘they tried to kill us, we gave in and signed a ceasefire, now what?’ It’s been nothing but a tit-for- tat,’ you bomb us, we bomb you merry-go-round’ ever since we pulled our citizens out of Gaza in 2005. I am a resident of the south (Ashkelon) living under the shadow of not knowing when the next conflict will start, when the next missile will be fired towards us. The gloomy part is our enemy is the one deciding on the when. To them we are like fish in a barrel. Happily this last round did not reach our neighborhood, but is that any consolation? No, especially when you only have 15 seconds to make it into your bomb shelter.

“Last November, when Hamas decided to fire over 500 missiles at us, one landed in the park across from our apartment causing considerable damage. Thankfully, it took place in the early hours of the morning and the park was empty. However, had the rocked traveled a mere 400 meters to the east it would have slammed into an adjacent apartment building, perhaps even ours!”

Evan Thomas in Netanya writes: “Unfortunately/fortunately we are visiting NZ at present so a rocket hitting a home seems a long way away. We spoke to our daughter who lives in Netanya and works in Tel Aviv. She did not seem the least ‘phased’ by the incident or by the threats from Gaza. For her it was just another day.

“Maybe that is the Israeli reality that needs to be stressed. The political climate is toxic, of course, and the Palestinian hardliners seem to be doing everything by their actions to see that PM Netanyahu is re-elected. It’s a crazy upside down world!”