Top Posts
Knowing the One Who Always Keeps His Word
Pregnancy Resource Centers Fight For Life Amidst Opposition
This World is Not Our Home
Lessons Learned From a Gingerbread House
Let There Be Peace on Earth
‘I Wanna Dance’ movie: Whitney Houston’s success and...
Fact Finding, Sight Seeing, and Prayer Walking
Kidney donation led to 8 life-saving surgeries
The Power of Curiosity
When Love Came Down at Christmas
Home ANS Feature ‘I Don’t Want My Child to Be Beaten’

From Human Rights Watch (HRW), a new 64-page report, “‘I Don’t Want My Child to Be Beaten’: Corporal Punishment in Lebanon’s Schools,” finds that children suffer from corporal punishment at school because of a lack of accountability for the abusers. 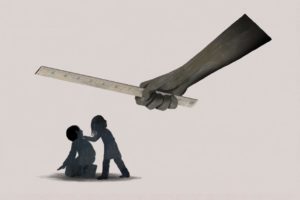 Children in Lebanon described being slapped, hit and beaten at school. Dadu Shin for HRW

Human Rights Watch said that Lebanon should enforce a longstanding ban on corporal punishment and proposed ways in which the Education Ministry, with support from international donors, can end the abuse.

“Corporal punishment was banned decades ago in Lebanon’s schools, but children still have to choose between suffering abuse or missing out on an education,” said Bill Van Esveld, senior children’s rights researcher at Human Rights Watch. “Adults are beating children in Lebanon’s schools, and that urgently needs to change.”

The report, based on 51 documented cases at both public and private schools across Lebanon of children who suffered violence, found that common punishments include humiliation, insults, and slapping or striking with the hand. Some children reported more severe abuse, including beatings with sticks, rubber hoses, and electrical cables, and cases in which so-called “discipline” spiraled into serious assault and harm.

One teacher hit a boy in the face with a book, knocking out two teeth, after he asked to use the bathroom. Another boy said his teacher whipped his hand with an electrical cable, causing a deep wound that was “bleeding for a few days.” A teacher gave a girl such “an intense beating” that her face was swollen and “red like tomatoes” when she went home hours later, her father said. In none of the cases documented in the report did school staff notify the children’s parents about what had happened.

The Education Ministry banned corporal punishment in the 1970s, and since 2014 there has been no defense for the crime of assault by school staff against students in Lebanon’s penal code. However, parents who complained said school officials typically rebuffed them, and in some cases teachers or the school director hit the child again in retaliation. In some cases, parents complained to the police without result. The Education Ministry did not refer any of the cases documented in the report for criminal investigation.

Corporal punishment can cause both short-term pain and suffering, and long-lasting harm.

Accoreding to HRW, in a 2018 article, four Lebanese pediatricians said they had found that violent discipline can predispose children to “aggression, delinquency and conjugal violence later in life,” as well as antisocial behavior, anxiety disorders, and problems into adulthood such as depression and suicidal tendencies. In contrast, “no studies have demonstrated a positive long-term effect of corporal punishment.”

Instead of helping a boy suffering side-effects from cancer medication who was having trouble with his lessons, a teacher insulted him, pulled his hair, and forced him to stand outside. Another boy’s teacher broke his nose after he asked why she was hitting another student. The boy’s mother, upset that the school only temporarily suspended the teacher, transferred her son to another school. His mother told Human Rights Watch that it took him a month after starting at a new school to understand that all teachers were not like the one who hit him.

Syrian refugee children may be particularly vulnerable to abuse amid a xenophobic political climate, Human Rights Watch found. Syrian children said that in addition to beatings, school staff insulted their national origin, and in several cases prohibited them from using the bathroom. All families in one Syrian refugee community stopped sending their children to a local public school for a week in early 2018 because of such abuses, until the school promised to end the beatings and allow the children to use the bathroom.

The Education Ministry warned in 2014 that with increasing numbers of Syrian refugee students, “existing corporal punishment practices are likely to make violence an increasing resort” for under-prepared teachers, citing a UN assessment that found more than 70 percent of children across the country suffered violent discipline at school. In 2018, the numbers of Syrian and Lebanese children in public schools were almost equal, at roughly 210,000 each.

The Education Ministry established a hotline and referral system for complaints of violence in schools, but families said they typically received minimal or no information about how or whether the complaints were handled. One Syrian family that complained said school staff threatened to report them to the police if they persisted. Like most Syrian refugees in Lebanon, the family lacked legal residency.

In May 2018, the Education Ministry issued a policy for protecting children in school, which reiterated the ban on corporal punishment. The policy is a positive step, and will be implemented in all schools by 2020. But to end corporal punishment, the ministry should prioritize enforcement, Human Rights Watch said. Specific steps include improving complaint mechanisms; publishing information on complaints received, the result, and the penalties for abuse; working with nongovernmental groups to follow up cases; and ensuring that all teachers are effectively trained.

To ensure that parents and children feel they can complain safely, the Education Ministry should publicize its commitment to follow up on anonymous complaints. The ministry should agree on ways to respect children’s confidentiality while also sharing more information on complaints with nongovernmental organizations, which often refer the complaints and have resources and expertise that the education system lacks to follow-up cases.

“Teachers need proper training in how to discipline children without using violence, and students need a system that gives them their right to an education free from fear,” Van Esveld said. “With common-sense reforms, Lebanon could finally end corporal punishment in schools.”

Boko Haram ‘life slave’ to be Celebrated on Three Continents