Top Posts
Knowing the One Who Always Keeps His Word
Pregnancy Resource Centers Fight For Life Amidst Opposition
This World is Not Our Home
Lessons Learned From a Gingerbread House
Let There Be Peace on Earth
‘I Wanna Dance’ movie: Whitney Houston’s success and...
Fact Finding, Sight Seeing, and Prayer Walking
Kidney donation led to 8 life-saving surgeries
The Power of Curiosity
When Love Came Down at Christmas
Home ANS Feature In Luhansk People’s Republic, Baptist Churches Are forced to Halt Services 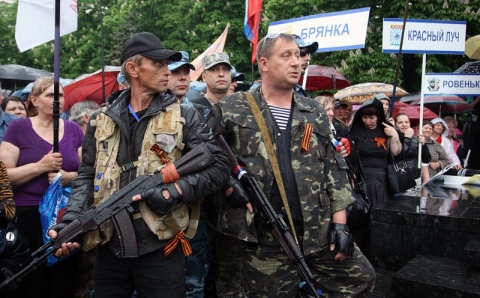 Luhansk is a breakaway region in East Ukraine

Luhansk People’s Republic, Ukraine – Officials of the unrecognized Luhansk People’s Republic threatened Baptist Union pastors not to meet for worship, sending “a clear message that they will not tolerate such meetings for worship any more”. Officials regard all Protestant churches as “illegal”. The 82-year-old independent Baptist pastor Anatoly Tolstenko faces court on 21 March.

This news story of the persecution of Protestant Christians in the Russian dominated Luhansk region of Ukraine was first published by Forum 18 News Service in Oslo, Norway.

Officials of the unrecognized Luhansk People’s Republic in eastern Ukraine have ordered Baptist Union churches to halt their public worship or risk punishment. “Officials earlier didn’t insist that our churches should not meet for worship,” Pastor Igor Bandura of the Ukrainian Baptist Union told Forum 18. “But they have now sent a clear message that they will not tolerate such meetings for worship anymore.”

“All Baptist churches that have prayer houses will halt meetings in them, so Sunday worship and other services from 17 March onwards will not take place,” Pastor Bandura added. He said church members fear that if they do not halt their worship, officials could raid their worship meetings or arrest church leaders.

The LPR authorities have rejected all registration applications from Protestant communities. “Unfortunately the situation for all Protestant churches is bad,” a Protestant from a different community in contact with fellow church members in the region told Forum 18 from the Ukrainian capital Kiev on 14 March. “We do not have registration in the LPR and do
not have the right to meet in our buildings, which have been closed.”

Meanwhile, about ten masked and armed fighters raided a worship meeting in February of Path of Salvation independent Baptist church in the city of  Luhansk. The church’s 82-year-old pastor, Anatoly Tolstenko, is due again in court on 21 March accused of leading illegal worship.

During a search, the men seized books which the authorities of the unrecognized entity have banned as “extremist”, including Jehovah’s Witness publications. Friends of the community insist the armed fighters planted the books. “These were not their books – the men planted them,” Sergei Kosyak, a Protestant and former resident of Donetsk, told Forum 18.