Top Posts
Pregnancy Resource Centers Fight For Life Amidst Opposition
This World is Not Our Home
Lessons Learned From a Gingerbread House
Let There Be Peace on Earth
‘I Wanna Dance’ movie: Whitney Houston’s success and...
Fact Finding, Sight Seeing, and Prayer Walking
Kidney donation led to 8 life-saving surgeries
The Power of Curiosity
When Love Came Down at Christmas
A Walk of Faith Begins with a Step...
Home ANS Reports Indian Christian Families Forcibly Displaced

According to Christian Solidarity Worldwide (CSW), Hindu Jagran Manch is affiliated to the Vishwa Hindu Parishad, the religious arm of the Rashtryia Swayamsewak Sangh (RSS), which is the ideological arm of the Bharatiya Janata Party (BJP) party led by President Modi, which retained power in India’s recent elections. The displaced families, including one pregnant woman, from Masiya Mahuwatoli village, Gumla district, Jharkhand state, have sought refuge in neighbouring villages. 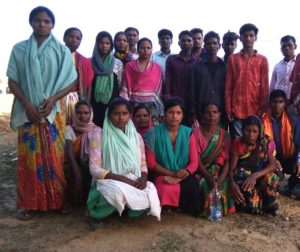 Members of the Christian families affected

CSW reported that on June 12, representatives of HJM made a list of Christian families in Masiya Mahuwatoli village, who were then instructed to renounce their faith and convert to Hinduism. Local sources say that at the instigation of the HJM, a crowd of approximately 200 villagers became violent when the families refused to change their religion. Threats included excommunication, land confiscation, prohibition from using the village road, prevention from accessing communal water and exclusion from government rations.

Anima Munda, who is nine months pregnant, managed to escape the intimidating and violent crowd. She had to walk for four miles to get shelter in a neighbouring village. On June 14, approximately 22 members of the HJM entered a Christian home and dragged a man and his widowed mother named Jugiya Munda to the street. They were taken to the local temple to renounce their faith. When they refused, their Bibles were burnt and the perpetrators carried out a conversion ceremony. On the same evening members of HJM attacked the home of a man named Mangra Munda. His home was damaged as a result of attempts by the perpetrators to get in. Mangra told local sources that they were going to kill him but he was able to escape as it was dark.

There are approximately 47 Christians in the village and 37 have managed to escape. They have sought refuge in other villages and continue to live in fear and for the future of their livelihood. Local sources say that the incident has affected 12 children who are not able to go to school. The families are concerned for their cattle and their agricultural crops. Concerns also remain for some of their aging parents who remain alone in the village and who require assistance and care.

CSW’s Chief Executive Mervyn Thomas said: “CSW is deeply concerned for the wellbeing of the Christian families who have been forced to either convert or run for their lives. The freedom to choose a religion is a fundamental right afforded to every Indian citizen. We urge the local authorities to prosecute the perpetrators of these crimes, to give full protection to these families, and to take the necessary steps to ensure that Christian families in Masiya Mahuwatoli village are able to live without fear and intimidation.”