Top Posts
Knowing the One Who Always Keeps His Word
Pregnancy Resource Centers Fight For Life Amidst Opposition
This World is Not Our Home
Lessons Learned From a Gingerbread House
Let There Be Peace on Earth
‘I Wanna Dance’ movie: Whitney Houston’s success and...
Fact Finding, Sight Seeing, and Prayer Walking
Kidney donation led to 8 life-saving surgeries
The Power of Curiosity
When Love Came Down at Christmas
Home World MissionsPersecution Indian Christians from Adivasi Tribe lynched by ‘cow vigilantes’

JHARKHAND, INDIA (ANS) — A Christian from an Adivasi tribe died when he and three Christians from his tribe were severely beaten on April 10 for skinning an ox in Jhurmo village, Jharkhand.

Christian Solidarity Worldwide (CSW) reports the owner of the animal, Adranish Kujur, reportedly sought help from local villagers to carve the ox after finding the animal dead from natural causes and the Christians came to help. 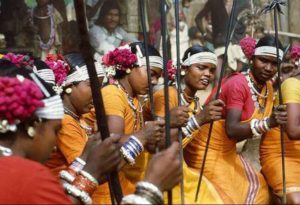 Members of the Adivasi Tribe in India

According to local sources, at about 8:30pm on April 10 a group of villagers from Jairagi village noticed the ox being skinned. They attacked the Christian men, chanting “Jai Sri Ram, Jai Hanuman” (Translation: “Long Live Sri Ram, Long Live Hanuman” – Sri Ram and Hanuman are Hindu deities) and beat them with rods and sticks.

The Christians have been identified as Peter Phuljans (50), Belasus Tirkey (60), Janriush Minz (40) and Prakash Lakra (55), who later died. The mob took them to the Dumri police station and the police rushed the men to the local hospital for treatment. Local sources say that Prakash died as a result of the lack of immediate medical care for the fatal injuries which he had sustained.

On April 12, a First Information Report (FIR) was registered against the three victims who survived the lynching under the Jharkhand Bovine Animal Prohibition of Slaughter Act 2005, which criminalises the slaughter of cows. Local reports have confirmed that the perpetrators do not belong to a tribal group and FIR has been registered against seven of them, while two have been arrested.

In August 2017, Ramesh Minj, an Adivasi Catholic from Tingari village, Jharkhand was lynched to death by his neighbours for allegedly slaughtering a cow. He was arrested and placed in a prison cell where he died from his injuries.

John Dayal, a civil rights activist and writer in India, said: “The scores of attacks by any mobs, often led by members of the Sangh Parivar*, need to be seen as attempts to lynch isolated Christian evangelists, pastors and personnel. Many are critically wounded. In the mass violence in Kandhamal in 2007 and 2008, many succumbed to their injuries.”

Dayal added: “The lynching of at least two Christians in Jharkhand in less than two years is, however, the culmination of first a state sponsored targeting of Christian tribals [sic], and the now nationwide carte blanche is being given to self- appointed cow vigilantes. In these two instances, the Christian tribals became victims of the marauding gangs who enjoy immunity and even patronage of the political ideologues who now rule India.

“The Supreme Court has expressed concern, international human rights groups have expressed their shock, but these have not moved the BJP and the RSS for whom the cow vigilantes are foot soldiers in the political exercise of polarizing the country between Hindus and the Muslim-Christian minority.”

CSW’s Chief Executive Mervyn Thomas said: “The Indian government’s failure to address the problem of cow vigilantism has perpetuated a culture of impunity. To say that cow vigilantism is for the respective state administration to address is irresponsible and breaches the government’s duty to protect its citizens under the Indian Constitution. There should be no place for vigilante groups in India.”

*The Sangh Parivar is a consortium of Hindu fundamentalist groups headed by the Rashtriya Swayamsevak Sangh (RSS), the ideological arm of the ruling party.