Top Posts
Knowing the One Who Always Keeps His Word
Pregnancy Resource Centers Fight For Life Amidst Opposition
This World is Not Our Home
Lessons Learned From a Gingerbread House
Let There Be Peace on Earth
‘I Wanna Dance’ movie: Whitney Houston’s success and...
Fact Finding, Sight Seeing, and Prayer Walking
Kidney donation led to 8 life-saving surgeries
The Power of Curiosity
When Love Came Down at Christmas
Home ANS Feature Indonesia Pilot Prompted to Speed Departure Before Earthquake 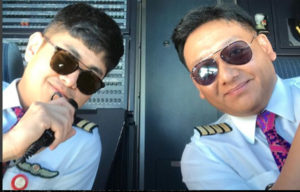 Captain Mafella (right) and his co-pilot

In Indonesia last week, the Holy Spirit prompted a Christian airline pilot to speed the departure of his Batik Air flight from Palu. The plane carried 140 passengers, narrowly averting a potential disaster with the loss of many lives.

The epicenter of a powerful 7.5 magnitude earthquake struck Friday September 28th in a mountainous area of Central Sulawesi, 48 miles from the provincial capital of Palu. Only minutes later, underwater landslides apparently triggered a massive 10-20 foot tsunami that swept through Palu and other coastal areas of Indonesia.

The waves were intensified by Palu’s location at the end of a narrow bay. At least 1200 people perished and smaller villages in the surrounding area were entirely swept away. Because communication has been poor in remote areas, the death toll may increase dramatically.

“All day Friday I had been feeling unsettled and I didn’t know why,” Captain Icoze Mafella recounted at a Jakarta church, Duta Injil BIP, on Sunday September 30th.

To displace his feelings of unease, Captain Mafella – a strong Christian – began to loudly sing worship songs on his flight from Ujung Pandang to Palu. “Usually I only hummed, but that day I wanted to praise the Lord as best I could,” he said.

“I think you should make a CD of worship songs,” his Muslim co-pilot told him, jokingly.

When they were about to land at the Palu Airport, the wind was unusually strong and he “heard a voice in his heart” directing him to circle again before landing.

The Palu airport is squeezed between two mountain ranges and some pilots refer to airports situated in this way as “valleys of death,” so once again, the pilot felt prompted to be extra careful in landing and recited the 23rd Psalm:

“I may walk through valleys as dark as death but I won’t be afraid. You are with me and your shepherd’s rod makes me feel safe,” he said.

After they landed, the Holy Spirit prompted him once more that he needed to be quick. He instructed his crew to take a shorter, 20-minute break, before the plane was due to take off for Jakarta via Ujung Pandang.

“I didn’t even leave the cockpit and requested permission from the control tower to depart three minutes ahead of schedule,” he recounted.