WASHINGTON, D.C. (ANS) – Following the November 27 terrorist attack on the Salvation Army’s service post in central Sulawesi, International Christian Concern (ICC) continued to follow up with its local contacts on the development of this case. The gruesome details of the attack were revealed to ICC as more information was made available.

International Christian Concern (www.persecution.org) reports that according to survivors of the attack, on Friday around 7:30 a.m., Nei was having breakfast with her husband, Yasa, and saw approximately 10 unknown people visiting Naka, who was at a nearby house in Tokelemo, Lembantongoa Village. 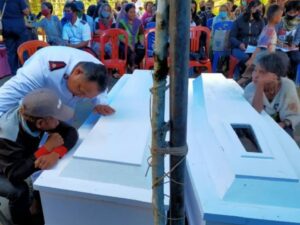 The funeral for some of the killed in Sulawesi attack

Soon, suspects Ali Kalora and Jaka Ramadan from the Eastern Indonesia Mujahideen (MIT) terrorist group were seen entering the house and calling Yasa out, with his wife Nei by his side. Yasa was then tied by one of the suspects and decapitated with a machete and stabbed in the back. One of the MIT members was seen near Yasa’s house, giving a signal to the other witnesses to flee, which allowed several witnesses and children to escape.

Naka and his son Pedi, along with their house, were set on fire, while a fellow church member named Pinu was stabbed to death. The terrorists also torched a total of eight houses, including the building that the Salvation Army service post used as its house of worship.

Yasa’s son, Ulin, survived the attack and reported it to the police. The head of Lembantongoa village, Deki Basalulu, told Benar News that approximately 750 people fled their homes after the attack and took shelter at a safe location roughly 5.5 miles away.

ICC says that Police suspect Poso-based MIT militants, who pledge allegiance to ISIS, carried out the violence on Friday since the leader of the outlawed group, Ali Kalora, was seen at the scene of the crime. According to Yoga Priyautama, the chief of police in Sigi, a joint team has spread out and conducted searches in a number of areas which are suspected to be the perpetrators’ escape routes.

According to the ICC report, the victims were part of the communities that were impacted by the flash flood last October. Forty families were relocated, but only 12 families lived in the village which later became the crime scene, where the nearby forests provide hideouts for the suspects.

Contrary to the authorities’ claim that the attack was not religiously motivated and “merely an effort by the MIT to fulfill their goals and show their existence,” MIT militants interacted with the community quite often, according to local Christians. The terrorists often asked for food from the church and the church fed them. Allegedly, the terrorists suspected that the community had reported their presence to the police and therefore retaliated.

ICC says The Salvation Army in Indonesia sent out a press release on November 28 to condemn the sadistic act and call for the government to arrest the perpetrators, take appropriate action, and investigate to eradicate these criminal networks. A funeral was held in remembrance of the victims on November 29.

Gina Goh, ICC’s Regional Manager for Southeast Asia, said, “While ICC appreciates the authorities for their swift actions to hunt down the perpetrators through the joint operation, it is disappointing to hear the official rhetoric that this attack was not motivated by religion and no church was burned down.

“Minority Christians in Indonesia have long suffered from discrimination and persecution and the Indonesian government should not cover the truth in the name of maintaining religious harmony.”