Top Posts
Knowing the One Who Always Keeps His Word
Pregnancy Resource Centers Fight For Life Amidst Opposition
This World is Not Our Home
Lessons Learned From a Gingerbread House
Let There Be Peace on Earth
‘I Wanna Dance’ movie: Whitney Houston’s success and...
Fact Finding, Sight Seeing, and Prayer Walking
Kidney donation led to 8 life-saving surgeries
The Power of Curiosity
When Love Came Down at Christmas
Home ANS Feature Iraq: seven Christmases away from home

Witney, England (ANS) – This will be the seventh Christmas that 11-year-old Fakhri will celebrate away from home, his church and his friends. Fakhri and many other children who fled Mosul, Iraq, with their families years ago, barely remember what their homes looked like. They do, however, cherish the idea of a warm, secure, precious place called home. In that picture, there is no space for the self-proclaimed Islamic State (IS), the violent radicals who shattered their world. 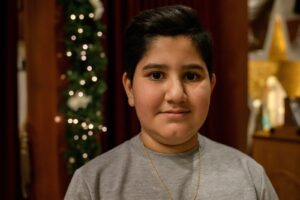 Mosul fell under IS’s control in June 2014 after six days of fighting between the Islamic terrorists and Iraqi military forces. The city was finally liberated three years later. However, it is still not deemed to be safe for Christians to return.

In a Syriac Orthodox church in Erbil (fifty miles from Mosul) where they found refuge, Fakhri and 16 other children gather in a choir to practise Christmas songs. The church is very different from those that some of them vaguely remember from Mosul: instead of the beautiful architecture, frescoes and chandeliers, it is now a structure made of aluminium panels. However, the tree, nativity scene, blinking lights and music still make it feel like Christmas. 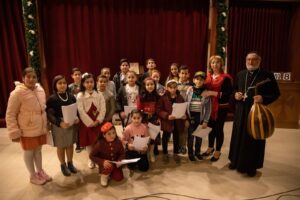 “I pray that there will be no terrorists in this world, so we can live in peace,” Fakhri says. Ten-year-old Mark continues, “I wish I would be able to go back to my church in Mosul.” Marina, 8, says, “I’d like to live like other children in the world in peace and love.”

Peace may not be what Mosul offers the children if they return home. The city, 250 miles north of Baghdad, is still considered to be dangerous.

Mosul is one of the cities in the Nineveh plains that used to be home to a vibrant Christian community. That is no longer true. The Christian population of the city was disproportionally affected by displacement following the violence.

Those who had fled to safety hesitate to return. They have little hope that the environment is favourable for a return and little trust in their Muslim neighbours, who once betrayed them. The radical Islamic influence still has a substantial presence in Mosul and creates a fragile security situation. It is still fresh in people’s memories how ordinary citizens collaborated with IS or became part of militias that persecuted Christians in Mosul.

According to the local partners of Open Doors, a charity that advocates for persecuted Christians, only about ten Christian families or 60 people have returned to Mosul so far. Most of them are elderly residents, while few children number among the returned. It has been reported that some of the Christian children have faced verbal abuse at school by their Muslim peers being called ‘Al Kufar’, which means ‘Infidel’. They have also been pressured to convert to Islam.

The majority of churches still stand in ruins in the city. At present, only the Syriac Catholic Church of Annunciation is holding Mass for those who have resettled.

Back in Erbil, far from home, Fakhri and his friends are continuing to practise their Christmas songs and they dream of home as they have been doing for seven years. Meanwhile,  Open Doors’ local partners have supported the children and their families all these years with emergency aid, trauma care, education, and helped some of the parents to start small businesses.

The children’s wishes may not all come true this year but Fr Zachariah, who also comes from Erbil, creates a festive Christmas atmosphere in the makeshift church where the children can still feel the warmth of home and believe in their dreams.

Iraq is number 15 on the World Watch List 2020, a ranking of 50 countries where it is most difficult to be a Christian.

Better Than Cash Alliance: Is the U.N. Promoting A Global Cashless Civilization?