Top Posts
Colorado football coach Sanders’ unabashed faith
There’s A Light That Enters Houses With No...
Knowing the One Who Always Keeps His Word
Pregnancy Resource Centers Fight For Life Amidst Opposition
This World is Not Our Home
Lessons Learned From a Gingerbread House
Let There Be Peace on Earth
‘I Wanna Dance’ movie: Whitney Houston’s success and...
Fact Finding, Sight Seeing, and Prayer Walking
Kidney donation led to 8 life-saving surgeries
Home ANS Feature Jesus at work in Baghdad

SAN ANTONIO, TX (ANS) – “I’ve never seen Jesus do as much as on this trip! I probably prayed for approximately 240-250 people, handed out about 90 New Testaments, 30 Gospels of John, and 20 Jesus film DVD’s,” says Dave Osborne of Family of Hope Ministries about his recent trip to Baghdad.

Osborne spent nearly three weeks in Baghdad. “I got to share the Gospel directly a few times with people who spoke English, or I had someone with me to translate. Jesus healed at least one person every day of the trip. Once or twice, as many as 20 in a day! I really anticipated some hostility and pushback, but almost everyone was very receptive! Let me share just a story or two with you from each day.”

On Day One of Osborne’s trip, Jesus healed the back pain in the Yazidi taxi driver Adel’s back while he was driving down to Erbil.  Osborne got to share the Gospel with him and leave him a Gospel radio. 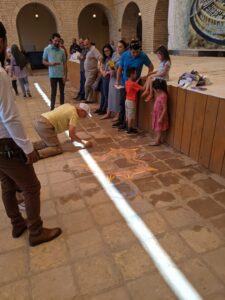 On Day Two, Osborne had lunch with a hotel worker at the time, whom he met in Erbil about a year and a half ago when he first visited. “He showed me the Gospel of John that I had given him then. He carries it in his brief case now, and says it gives him comfort. He’s only read it once, but after seeing Jesus heal a couple of people at the restaurant, I’m hoping he’ll want to read it again!”

On Day Three, Osborne met Amir on his layover in Istanbul. “He’s from Iran, living in Germany, and was on a business trip. His brother is now following Jesus and leading a ministry in the U.S. He’s pretty much finished with Islam, but not following Jesus yet. I suggested our meeting must be from God. He gave me a ride back to the airport, I bought him dinner, and shared the Gospel with him. He let me pray for him at the airport, and he said he felt peace.”

Walking though a mall, looking for encounters, Osborne said Jesus healed the pain in fast food worker’s knee, while maybe half a dozen workers looked on. Osborne left him with the New Testament and a Jesus film and the following day, at the park he visited that day, Jesus healed the pain in  his knee and back, on the banks of the Tigris river. “He and his buddy Ali, stood guard with their black Hummer, with what I guessed was a 50 cal. machine gun mounted on it. Jesus also healed the pain in Ali’s back and head, and I got to leave both of them with a copy of the Jesus Film.”

On Day Ten, Osborne started walking down a street to minister and saw some men unloading boxes from a truck. “I walked up to the truck, and just started helping them unload the boxes. Jesus healed the pain in one man’s knees, and another’s back. Further down the street, a little kiosk owner named Ali, was moving packets of bottled water from the curb to his kiosk, so I helped him. Jesus healed the pain in the bottom of his foot, and I got to leave him with a Gospel. The photo of him on his WhatsApp profile is of him holding a rocket launcher!”

The next day,  Jesus healed the pain in a shop keeper’s knees. “As I walked by a few minutes later, I saw him reading the New Testament I left with him.”

Osborne said that on Day Twelve: “We had an unexpected treat and got to go visit ancient Babylon in the morning. But, people still need Jesus when we’re being a tourist! Jesus healed our guide’s neck and shoulder pain, and I got to share the Gospel with him. Jesus also healed two guards there, and a guy’s shoulder in the Nebuchadnezzar museum!”

The day after that there was a strong military presence at Tahrir Square, because they had been having demonstrations. “I started praying for soldiers, and lost count of how many got healed, but I’m guessing 12-15. I’d be praying for one, and someone would tug on my arm and point to some place on his body. Almost everyone I prayed for wanted a Gospel!

“That evening, I was in a coffee shop with a young guy that was translating for me. We were asking the Holy Spirit what He wanted to do. There was a man with a laptop, a few tables away, and I felt like the Holy Spirit impressed upon me that he had pain in his back. This doesn’t happen very often, but it’s a gift I’ve been praying for. We went over and asked him, and sure enough he did. Jesus healed his back, and we had a great conversation with him. He’s an engineer and thinks a lot. He said he has respect for all religions, even atheists (and) I asked him if he thought it was possible that since Jesus had told us he had pain in his back and then healed it, if perhaps Jesus was special? He agreed. He said he didn’t have time to read, but I asked him that since Jesus had done this for him, would he be willing to take 5 minutes a day to read the Injil and ask God to show him the truth about Jesus? He agreed, and we got to leave him a New Testament and then pray again for him, commanding darkness to leave, and asking that God would fill him with His light and love, and reveal truth to him.”

The following day, Osborne went back to Tahrir Square. “Jesus healed maybe 15-20 police officers, and we got to give out more Gospels. On the way home, I prayed for a garbage man and the driver of the truck. Jesus healed both of them!”

On the morning of the day he was to fly out, Osborne went to a busy place where he knew there would be lots of people. “I finally had one last Gospel to give away, and was asking the Holy Spirit what He was doing. I saw an old man with a cane, dressed in a typical gown with a skull cap, and walked up to him.

“Hassan had been a professor, spoke some English and said he didn’t believe in any religion. Jesus healed the pain in his hip, so I got to tell him Jesus loved him, and was showing Himself to him. He said he had the Injil at home, so I encouraged him to read it, and ask Jesus to show him who He really is.”

Later, at the Baghdad airport, Jesus healed the pain in a woman’s knees who had been sitting in a wheel chair. “I gave her and her twenty-something daughter a Gospel, told them Jesus loved them so much, and went and sat down. The daughter came over and asked if I could help her. There was a man she wanted to marry, who didn’t want to marry her. He married someone else, but since you can have four wives in Islam, she wanted to be number two. I was thinking, ‘who wants to be number two?’ She let me pray for her, she felt peace, and I got to leave her the phone number of our host’s wife. Please pray for her.”

On the next-to-last day of Osborne’s trip, when he was back in Erbil, he went down to have a late breakfast in the Hotel where he stayed.

“As I’m going through the buffet, a man gets up, comes over, and asks me if I remembered him. I said I was sorry, but I didn’t. He said, ‘You prayed for me in Baghdad.’ He had been walking down the sidewalk and I noticed him limping. Jesus had just healed the pain in a shopkeeper’s chest and knees. That shop keeper then took me down to his friend’s shop, and Jesus healed his friend’s shoulder.  The first man invited us into his shop, so I could pray for this man’s leg. He didn’t get healed (but) I walked down the sidewalk with him a ways, giving him a Jesus Film and encouraging him to ask God what the truth is.

“Now, back to the buffet. I said maybe I could pray for him again. He sat down with his friend, and I went and sat by myself. I was thinking, ‘this can’t be a coincidence.’ I saw him get up to get more food, so I walked over to him and told him what I thought. He said maybe it was God. I offered to buy him dinner, but he wasn’t going to be back until 7 or 8 that evening.  I (then) asked if I could pray again, and we met in the lobby. He said he had about 5 minutes. He spoke pretty good English, so I shared the Gospel with him and prayed for him again. He still didn’t get healed. I gave him a Gospel of John with my contact info (that he asked for) and encouraged him to read it, asking God to show him the truth about Jesus. He called me a few days later. He didn’t ask me for anything, just wanted me to have his number.

“Even when we don’t see what we’d like to see happen, it doesn’t mean that the Holy Spirit isn’t moving in people’s lives. Please pray for him.”

The next morning at breakfast, before taking a taxi back to Duhok, Jesus healed the pain in a waiter’s back. Yul is from the country of Georgia.

“I encouraged him to search for the Injil on the internet in his language. I’m curious to see what God will do in the country of Georgia through that encounter!”

Osborne concluded: “Jesus is amazing! I hardly know any Arabic. Most of the time it was just me with my little, poor Arabic, and Google Translate. A few times I had a translator, but they spoke little English, so that was difficult. I got to plant several seeds. Please pray that God will cause them to grow! In a city of almost 9 million, our host said he thinks there are only 14 expats reaching out.”