Top Posts
Colorado football coach Sanders’ unabashed faith
There’s A Light That Enters Houses With No...
Knowing the One Who Always Keeps His Word
Pregnancy Resource Centers Fight For Life Amidst Opposition
This World is Not Our Home
Lessons Learned From a Gingerbread House
Let There Be Peace on Earth
‘I Wanna Dance’ movie: Whitney Houston’s success and...
Fact Finding, Sight Seeing, and Prayer Walking
Kidney donation led to 8 life-saving surgeries
Home World Missions Join The Pack — Is Back!

COCONUT CREEK, FL. (ANS) — Food For The Poor’s annual community food packing event — Join The Pack — is back this spring, but with a twist.

According to the ministry, at this year’s event, businesses, churches and community groups will unite for two days to pack 150,000 meals for starving children in Guatemala. 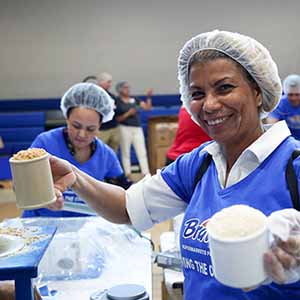 Bravo Supermarkets is returning as a presenting sponsor for Food For The Poor’s Join The Pack on May 31 and June 1 at Florida Atlantic University in Boca Raton. The supermarket chain also plans to bring a team to pack meals. Photo/Food For The Poor

But in addition to packing those lifesaving meals, volunteers also will raise funds to build nine homes in Sansur, Guatemala, for families in desperate need of safe shelter.

The Join The Pack is set for Friday, May 31, and Saturday, June 1, at Florida Atlantic University’s Student Union in Boca Raton.

Longtime partners Food For The Poor and Minnesota-based Feed My Starving Children, a Christian nonprofit organization that sends prepackaged meals to more than 70 countries, are teaming up for Join The Pack. The partnership, which dates back to 2008, resulted in almost 57 million meals in 2018.

The easy-to-make, easy-to-transport MannaPack meals are an answer to countless prayers. In a place like Guatemala, which suffers from one of the worst rates of chronic malnutrition in the world, the meals are like manna from heaven.

“At schools and orphanages, MannaPack meals are a lifeline for young children,” said Food For The Poor Vice President Mark Khouri.

Last September, a trio of Food For The Poor donors traveled with Khouri and the charity to hand-deliver MannaPack meals such as the ones they packed last April.

For donors Eliza and Juan Diaz, co-owners of Bravo Supermarkets in South Florida, and Rosalie Co, of DaVita Kidney Care, the trip was an eye-opening, heart-opening experience.

While the purpose of the trip was for the group to witness how the meals they packed were a blessing to families, it was clear that many needed more than just food. They needed a safe place to call home.

“They just don’t need the MannaPack. They need more help from us,” Co said.

One of the families they met on that journey, Flor and her daughter and Flor’s parents, brother and sister, received the keys to their new homes in February, thanks to a generous donor from Palm Beach Gardens, Florida.

“It is a dream that came true for us,” Flor said. “I cannot pay you back. But I know God will repay you double what you gave me. Thank you very much. You changed my life.”

But in Sansur, Guatemala, 23-year-old Blanca still dreams of a new home where she can keep her three young daughters safe and warm in Guatemala’s high-altitude cool winters. She wouldn’t have to worry about the rickety roof of the shack they share falling in.

Khouri said the charity goes to great lengths to find and serve the poorest of the poor, whether it’s providing lifesaving food or providing clean water and a safe place to live with the help of compassionate donors.

“Join The Pack is an incredible opportunity to do hands-on work that will have an international impact directly benefiting poor families,” Khouri said.

At the first three Join The Pack events, volunteers have packed more than 375,000 MannaPack meals for starving children in Haiti and Guatemala, and raised enough funds to send almost 9 million meals to families in countries in Latin America and the Caribbean served by Food For The Poor.

Last fall, the charity took Join The Pack on the road to Orlando, where volunteers packed 47,524 meals during a one-day event.

Food For The Poor is looking for businesses, churches, community groups or individuals to form Join The Pack fundraising teams.