Top Posts
Knowing the One Who Always Keeps His Word
Pregnancy Resource Centers Fight For Life Amidst Opposition
This World is Not Our Home
Lessons Learned From a Gingerbread House
Let There Be Peace on Earth
‘I Wanna Dance’ movie: Whitney Houston’s success and...
Fact Finding, Sight Seeing, and Prayer Walking
Kidney donation led to 8 life-saving surgeries
The Power of Curiosity
When Love Came Down at Christmas
Home ANS ReportsCulture US Poet Laureate Joy Harjo Visits Albuquerque 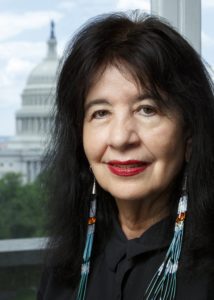 ALBUQUERQUE, NEW MEXICO (ANS)—She spent much of her life in New Mexico as a student—both in Santa Fe (Bureau of Indian Affairs for high school) and at the University of New Mexico in Albuquerque—but Joy Harjo was born in Tulsa, Oklahoma in 1951 to Muscogee Creek (father) and Cherokee (mother) parents. Now sixty-eight years after her birth, Harjo is the Poet-Laureate of the United States, the first Native-American appointed to the esteemed position. Succeeded by Tracy K. Smith, Harjo is the 23rd poet laureate.

During her hour reading at the Kimo Theater in downtown Albuquerque (built in 1927 along historic Route 66), Harjo began her time at the sold-out event by playing a welcome song on Native flute, taught to her by her uncle Joe. 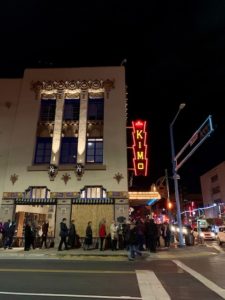 Line outside the Kimo Theater waiting to hear Joy Harjo

After her musical performance, Harjo read from her newest collection of poems, An American Sunrise.  In writing the poems, Harjo states, “It’s funny how things happen. You must listen to your spirit. Sometimes your spirit will urge you on very strongly.” Harjo tells the audience that she was busy writing a musical and teaching at the University of Tennessee, Knoxville, when she was encouraged to write the book.  During her interview at the university, she reminded the faculty that her 7th great-grandfather stole horses in the area from the Europeans.  Originally from the southern part of the US, the Muscogee-Creek were illegally transported to Oklahoma via the Trial of Tears. In a humorous punch line Harjo states, “They hired me anyway.”

Pensively, she concludes, “It is difficult, very strange, to go to your homeland and your people are not there.  To go to a place of ethnic cleansing brings a lot of grief.  We even found houses in Georgia that belonged to my relatives. But there is a lot of beauty there as well.” Harjo likened her experience to what is happening in the world today—forced immigration and captivity.  And just before she read, she states that she’s been working with Native poets on an anthology called When the Light of the World Was Subdued, Our Songs Came Through: A Norton Anthology of Native Nations Poetry, due Fall 2020. 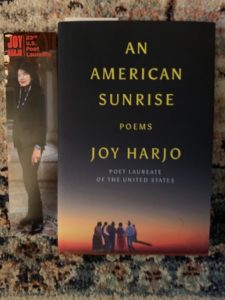 Accommodating a story-teller approach to her reading, Harjo brings the audience on a sojourn of poems ranging from Native-inspired works to her yearning to bathe her mother after her mother’s death. In all she reads, Harjo mixes poems that are both heart-wrenching and light-hearted. Her calming voice, traditional Muscogee dress (made by Leslie Deer), and pleasant demeanor held the audience captive throughout.

In other poems, there are spiritual overtones, incorporating both Native and Christian symbolism. In one poem she reads, Exile of Memory, Harjo brings together both.  In the poem, Harjo states that Muscogee people value community. And though Christianity divided the people, when Jesus came, they made Him a relative, giving “Him a Muscogee name.”

As the author of seventeen books and various musical CD’s, Harjo, as United States Poet Laureate, will seek to raise the national awareness of poetry while traveling throughout the US giving readings and writing new works of poetry. 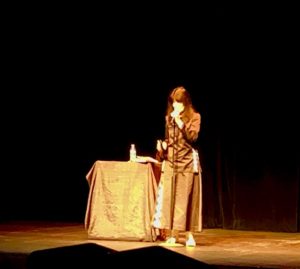 Harjo reading at the Kimo Theater in Albuquerque, New Mexico

Speaking of new works, Harjo treats us to a new poem.  Putting down her book, Harjo picks up her phone to read a recently composed work. She wrote the poem in response to an impossible question someone asks her: “What is beauty?”  In order to think through the question, she wrote a poem, saying the work “surprised me.” The Life of Beauty is Harjo’s answer to the question.

And during the reading, beauty bathed us all.

Gospel for Asia Unwraps ‘Hope to Forgotten Ones’ Christmas Campaign