Top Posts
Knowing the One Who Always Keeps His Word
Pregnancy Resource Centers Fight For Life Amidst Opposition
This World is Not Our Home
Lessons Learned From a Gingerbread House
Let There Be Peace on Earth
‘I Wanna Dance’ movie: Whitney Houston’s success and...
Fact Finding, Sight Seeing, and Prayer Walking
Kidney donation led to 8 life-saving surgeries
The Power of Curiosity
When Love Came Down at Christmas
Home ANS Feature Nigeria: Driven From Their Homes

Kaduna State, Nigeria (ANS) – Attacks on Christian communities in Nigeria are an almost daily occurrence. Christian villages are being raided by heavily armed Fulani militants, who kill men, women and children and drive them out of their homes. According to UNHCR, almost 3m people have been forced to flee in north-eastern Nigeria alone. UK-based Release International is providing relief aid and trauma counselling to the victims of the attacks. 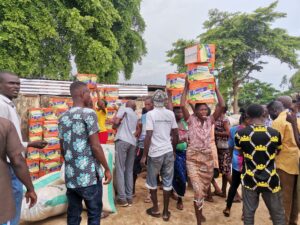 Daniel will never be able to forget the night Fulani militants attacked his village last year. It was a night that devastated his family.

‘Armed Fulani militants attacked while I and two other men were on night patrol. We heard gunshots from a distance.

‘Unknown to me my house was the first they targeted. They shot my wife and five of my children,’ said Daniel. ‘I thank God that two of my children survived – but I lost my wife and three of my kids. Then they threatened to attack again.’

Daniel is now living in a camp for internally displaced people (IDPs) in Kaduna state.

Wife and mother Zugwai is living in the same IDP camp. She recalls the attack on her village that forced her to flee. ‘After our last meal we went to bed when we heard gunshots. We ran into the bush for safety while our houses were set ablaze by the attackers.

‘My house and the hair salon I was running were burned down. Since then we have been in this camp, struggling for survival.’

Partners of UK-based Release International, a ministry to persecuted Christians worldwide, have provided food and other emergency resources for people at the camp.

‘God has used kind-hearted people to support us,’ Zugwai added. ‘It is my prayer that these evildoers who attack us will come to repentance.’

According to the latest report by the USCIRF (United States Commission on International Religious Freedom) ISWAP fighters executed five aid workers as a warning to ‘all those being used by infidels to convert Muslims to Christianity’.

Along with the Islamist terror groups, there are increasing attacks from heavily armed Fulani militants. These, too, are taking on an Islamist dimension. According to USCIRF: ‘Fulani-affiliated armed groups used religious rhetoric while conducting myriad attacks on predominantly Christian villages.’

Nigeria now ranks sixth in the world on the Global Terrorism Index.

Fighting and insecurity have forced almost 3m people from their homes. The IDP camp where Daniel and Zugwai live houses around 5,000, including infants and the elderly. Conditions are challenging.

Release International’s partners have provided basic necessities such as rice, beans, sugar, salt and soap, in handy buckets. They also provide medical support and Bible-based trauma counselling for people struggling in the wake of the attacks.

Murna is another mother forced to live in the camp after fleeing violence. ‘We were asleep at about 11pm when we heard sporadic gunshots,’ she said. ‘I managed to run into the maize plantation to hide. Our houses were burned down. I lost an in-law and his son that night.’

Another survivor, ‘Grace’ lost her house and her food supplies to the attackers. ‘Our major source of livelihood (farming) has been taken away from us as we cannot access our farms again for fear of attacks. We also lack blankets to keep warm at night. I am grateful to those who are thinking of us. May God bless and replenish you.’

Grace said a family of five that she knew was killed in the attack.

Gideon, a carpenter has taken refuge in a makeshift camp further south in Benue state.

He recalled the day militants attacked his village. ‘We were already asleep when we heard gunshots. We had been surrounded by armed Fulani. We managed to run to the bushes to hide. They shot at us while we ran. We tried going back but they attacked again.’

Samuel has been living at the same camp since 2020, after Fulani attacked his village, killing people, burning houses and destroying farmland. ‘We cannot go back for fear of being attacked again. We have been surviving hand to mouth.’

‘Please continue to pray for all Christian families in Nigeria who have been displaced by attacks on their communities,’ says Release International CEO Paul Robinson.

‘There is practical help we can give to Christians who have been forced to flee. These precious believers need your prayers and gifts to survive – and rebuild their lives.

The Fruits of your Righteousness