Top Posts
Knowing the One Who Always Keeps His Word
Pregnancy Resource Centers Fight For Life Amidst Opposition
This World is Not Our Home
Lessons Learned From a Gingerbread House
Let There Be Peace on Earth
‘I Wanna Dance’ movie: Whitney Houston’s success and...
Fact Finding, Sight Seeing, and Prayer Walking
Kidney donation led to 8 life-saving surgeries
The Power of Curiosity
When Love Came Down at Christmas
Home World MissionsPersecution Nigerian street preacher arrested in London

LONDON, UK (ANS) — A Nigerian street preacher has been  arrested in London, according to Barnabas Fund contacts and other sources.

The Metropolitan Police has ordered its Professional Standards Unit to begin a review into the arrest of Oluwole IIesanmi, a Nigerian street preacher, on Saturday, February 23 in front of Southgate Tube station, north London.

Police officers said they arrested Mr IIesanmi, “in order to prevent a breach of the peace.” 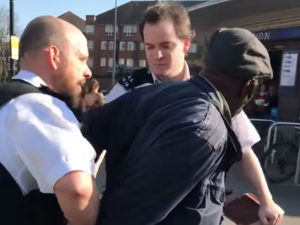 Officers deemed it appropriate to remove the Nigerian street preacher

According to Helen Millichap, Chief Superintendent and Enfield Borough Commander, the officers responded to a 999 call at 13:55 on Saturday, February 23 from a member of the public who claimed that Mr IIesanmi had made “Islamophobic” comments and been confronted by “a small number” of people. According to the arresting officers, a second witness “supported the allegations made by the original caller.”

Officers “deemed it appropriate to remove” street preacher Oluwole Ilesanmi from the area, according to Chief Superintendent Helen Millichap

In the statement the Commander further justified the arrest by describing the preacher’s activities as being “perceived as being a potential hate crime.” However, nothing in the eyewitness account or video suggests that this was the case.

The police response also contradicts eye witness accounts by failing to make mention of the young man in a hooded top seen aggressively confronting the street preacher threatening him, before fleeing when the police arrived.