Top Posts
Knowing the One Who Always Keeps His Word
Pregnancy Resource Centers Fight For Life Amidst Opposition
This World is Not Our Home
Lessons Learned From a Gingerbread House
Let There Be Peace on Earth
‘I Wanna Dance’ movie: Whitney Houston’s success and...
Fact Finding, Sight Seeing, and Prayer Walking
Kidney donation led to 8 life-saving surgeries
The Power of Curiosity
When Love Came Down at Christmas
Home World MissionsPersecution Northern Ireland MP adds voice to Pakistan rape case

NEWTOWNARDS, NORTHERN IRELAND (ANS) – The founder of a UK-based advocacy group for minority rights, has praised a Northern Ireland Member of Parliament for adding his voice to concerns for the safety of a Pakistani Christian woman who was allegedly kidnapped, raped and forced to convert to Islam.

Khan stated: “Naveed Iqbal, Mrs Saima Iqbal’s husband told us that Saima Iqbal is very unwell because of the injuries the accused inflicted on her.” He urged people around the world to pray for Saima Iqbal.

Mr Khan stated that successive governments in Pakistan have failed to give equal rights to Pakistani Christians and its other minority citizens.

“We call on the Pakistani authorities to give justice to Saima Iqbal before it is too late. The fact that Saima Iqbal and her family have been forced to go into hiding in their own country says a lot about the deplorable situation of minority rights in Pakistan,” said Mr Khan.

“We would like Prime Minister Imran Khan to deliver on the promises he made to Pakistani minorities during the election campaign,” he said.

Shannon’s letter states the facts of the case and goes on to say: “The abductor, Khalid Satti has been released on bail and the Iqbal  family are frightened and hiding in a secret place. No medical examination has been carried out by the police to verify the physical wounds.” 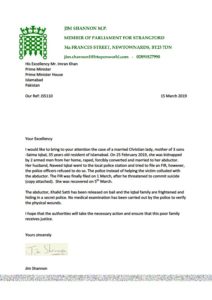 Shannon concludes: “I hope that the authorities will take the necessary action and ensure that this poor family receives justice.”

Richard James Shannon is a Democratic Unionist politician from Northern Ireland. He has sat in the House of Commons of the United Kingdom since 2010 as the Member of Parliament for Strangford. He had previously sat in the Northern Ireland Assembly from 1998 to 2010 as the Member of the Legislative Assembly (Northern Ireland) (MLA) for the Assembly constituency of Strangford.  Shannon was a soldier in the Ulster Defence Regiment in 1973–1975 and 1976–1977 and was awarded the General Service Medal. He served in the Royal Artillery TA from 1977–88.