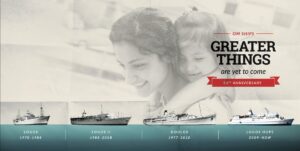 Mosbach, Germany (ANS) – The pioneering vessel, Logos, and her volunteer crew left a shipyard in Rotterdam on 18 February 1971. They were bound for London, where the refitted ship was shown to supporters of the venture and loaded with literature for her maiden voyage to India.

In the five decades since, the ministry’s four vessels have covered enough nautical miles to circumnavigate the globe five times; with crew having welcomed almost 49 million people up the gangways and reached out to perhaps as many more again on shore. Logos, Doulos, Logos II and Logos Hope have shared knowledge, help and hope in 150 countries; distributed hundreds of tonnes of books and aid supplies; supported communities after natural disasters and come alongside those who are marginalised in society.

The ships’ volunteers – mostly young people from upwards of 60 different nations – have inspired thousands more to step out in service, grown in their own personal faith and received training for their future through their experiences on board.

Operation Mobilisation’s founder, George Verwer, says that when he first floated the idea of buying a ship to give the ministry global reach, people thought he had ‘lost his marbles.’

Fifty years on, he reflects: “We rejoice over all God has done through our four vessels. At least 100 million people worldwide have come into contact with the gospel in some way. We know thousands have professed faith, but only heaven will tell the full story. We remain so thankful to God for our countless behind-the-scenes workers, prayer partners and supporters.”

The anniversary is being marked with a series of events. Prayer partners, donors, former crew members and ministry leaders will get together virtually to share their memories and look ahead to future plans.

They will also connect with the current ship’s crew to hear how, despite the challenges of coronavirus, Logos Hope is still on mission in the Caribbean; having just welcomed a new intake of volunteers from around the world. They remain passionate about continuing the Ship Ministry’s legacy, finding creative ways to engage with communities and being Jesus’ hands and feet wherever there is need.

Seelan Govender, OM Ships’ CEO, says: “We look back at 50 years of Ship Ministry impact on the world and are incredibly humbled and honoured to be used by God. The message of the gospel is one of transformation, and millions have experienced its power in their life and community through their encounter with one of our ships. This message continues to drive us forward as we consider that millions more need to experience God’s love.”

Gospel for Asia Calls for Prayer for ‘Unity, Holiness, End to Pandemic’ During ‘Great’ Lent