Top Posts
‘Nothing is Impossible’ movie: Hoops, romance, second chances
‘God’s Smuggler’ Brother Andrew passes to his reward
Cultivating a Prayer, Care, Share Lifestyle
God Has Plans for Your Life
Worth and Value in the Kingdom of God
Grandchildren Bring Joy and Opportunities to Our Lives
Embracing Change and Changing Lives
Dark Academia and Dead Monks
She ‘intensely related’ to Mary Magdalene character on...
The Most Powerful Thing in the World
Home ANS Feature Open Doors at 65: “Christian persecution is everyone’s business, not just Christians”

Witney, England (ANS) – As Christian persecution charity Open Doors celebrates its 65th anniversary this week, the UK CEO of Open Doors says it’s time that the persecution of Christians was something that concerned everyone, including governments, and not just churchgoers. 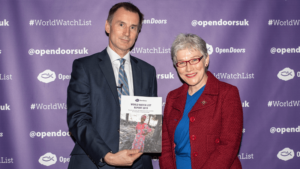 Talking to the ChurchTimes Henrietta Blyth said “Speaking up for Christians imprisoned for speaking about their faith, or even meeting to worship, has been something seen as ‘best left to churches.’”

However, she explains, the violent persecution of millions of Christians around the world needed to be more than a ‘niche concern’ for Christians: “Time and again, we see how a Christian population within a society can be a force for peace and civility.

“[By supporting these Christian minorities] I believe that we are supporting a more humane world and future. That is surely something that everyone can get behind.”

She made her comments following promises from the Foreign and Commonwealth Office that a new programme of targeted sanctions will be used to support religious minorities. The Foreign Secretary Dominic Raab has said “Our new global human rights regime will allow the UK to protect people of all religions… against serious human rights violations and abuses, and ensure the perpetrators are sent a clear message that the UK will not tolerate their atrocious actions.”

While welcoming the latest moves, Henrietta has warned that there was much more to be done: “Western governments are so often blind to religionas a vulnerability… Religious illiteracy has been tolerated in a way that ignorance about other issues would never be.”

The comments mark 65 years since the birth of Open Doors’ ministry. In July 1955 Brother Andrew made his first trip across the Iron Curtain, to Poland. Whilst there he received his calling to “strengthen what remains” of the persecuted church around the world. After being told by one pastor on the trip “When you come again, please bring Bibles with you,” he began his workof Bible smuggling, immortalised in the book God’s Smuggler.

Today Open Doors operates in over 60 nations, offering support to persecuted Christian communities as well as advocating on their behalf to western governments.

Plant a Seed and Watch God Make It...