Top Posts
Knowing the One Who Always Keeps His Word
Pregnancy Resource Centers Fight For Life Amidst Opposition
This World is Not Our Home
Lessons Learned From a Gingerbread House
Let There Be Peace on Earth
‘I Wanna Dance’ movie: Whitney Houston’s success and...
Fact Finding, Sight Seeing, and Prayer Walking
Kidney donation led to 8 life-saving surgeries
The Power of Curiosity
When Love Came Down at Christmas
Home World MissionsPersecution Operation Safe Havens: 78 Persecuted Christians rescued

McLEAN, VIRGINIA (ANS) — Barnabas Aid has rescued 78 Christians from dire persecution this year during Operation Safe Havens, making it possible for them to travel to a safe haven in Australia.

In March, Barnabas Aid set a prayerful target of issuing 100 air tickets in the next three months to bring persecuted Middle Eastern Christians to Australia in what they are calling Operation Safe Havens. 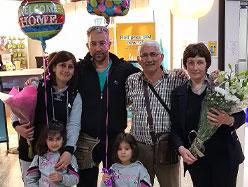 Smiles of joy as a Syrian Christian family arrives in Australia to start a new life, free from violence and persecution

As of May 16, the total number of tickets issued was 78. Barnabas Aid is thankful to God, to the generosity of our supporters and to the wisdom of the Australian government for this excellent progress.

Among them “Dina” and “Luko” (not their real names).

Two of “Dina’s” brothers were waiting in line to buy bread from a bakery in Syria when they were killed in a drive-by shooting.

The occupants of the car that sped past, firing at the bakery, were terrorists from the Jabat al-Nusra rebel group. They drove on to the village where Dina lived with her husband and two children.

Shooting and plundering as they went, the terrorists entered every home, gathered the Christians together and told them to leave and never come back, or they would be killed and their children raped.

“They said they would kill me if I didn’t convert.”

When “Luko’s” father died ten years ago, he and his mother were left without an adult male to protect and provide for them. That was hard enough in Middle Eastern society, but Luko tried his best to earn money while he continued his studies.

When the Syrian civil war began, their circumstances changed from difficult to dangerous, because of their Christian faith. “We live in fear in every situation … Because of our religion we live in fear because we are a target for extremists,” said Luko.

“We try to get along with people from other religions, but we are always watching our backs,” continued Luko. “I have been targeted and chased from my school by some young people, they asked me to withdraw because I am a Christian. They ended up saying that they would kill me if I didn’t convert.

“I attempted to avoid them at all costs; it reached to extremes when they followed me home and began kicking at my door, saying that they were going to kill my mother and me.”

“We want to never be attacked because of being a widow and a Christian.”

Luko and his mother yearned to escape. Luko, by this time at university, longed to continue his studies and graduate. “We want to never be attacked because of being a widow and a Christian,” he said.

Dina and family, Luko and his mother, are among many Middle Eastern Christians whom Barnabas Aid is enabling to re-settle in Australia, by helping with their airfares.

This is the mission of our Operation Safe Havens – to rescue desperate Christians, suffering extreme persecution, and bring them to places of safety and freedom.

God Has the Best Plans for Your Life