Top Posts
Tomorrow is Promised to No One
‘Needtobreathe: Into The Mystery’ Documentary Feature to Premiere...
Unmasked: Conquering Sexual Sin and Walking in Victory
Performers Announced for the 52nd Annual GMA Dove...
Girls Exposed to ‘Shadow Pandemic’ of Sexual Abuse
Best in Contemporary Christian and Gospel Music to...
John Warwick Montgomery to Deliver Lanier Lecture
God is Perfect in All His Ways
Letter-writing and prayer campaign launched for persecuted believers
Sight Seeing, Fact Finding and Prayer Walking: A...
Home ANS Feature Over Fifty Attacks in Nigeria by Boko Haram go Unreported

Over Fifty Attacks in Nigeria by Boko Haram go Unreported

New Malden, England (ANS) – According to Christian Solidarity Worldwide the Ekklesiyar Yan’uwa a Nigeria (EYN, Church of the Brethren in Nigeria) has reported that Boko Haram terrorists carried out over “fifty different attacks on different communities between the end of 2019 to June 2020,” most of which were “unreported or under reported by both the print and electronic media.” 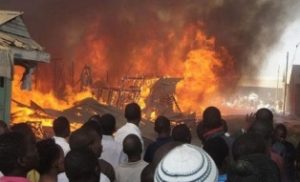 In a statement read out on 2 July by EYN National President Reverend Joel Billi during a press conference in Yola Adamawa, the Church also revealed that over 700,000 church members have been displaced, eight pastors and over 8,370 lay people have been killed, and an unknown number of people have been abducted by the terrorist factions. “Only seven out of 60 District Church Councils […] were not directly affected by the insurgency.”

CSW reports that the EYN is the largest Christian denomination in northeast Nigeria, where the Boko Haram factions operate. Consequently, it is the denomination most impacted by terrorist violence. 217 of the 276 school girls abducted from their school in Chibok in April 2014 are EYN members, and over 300 of the denomination’s 586 churches have been either burnt or destroyed, “with uncountable numbers of houses belonging to our members looted or burnt.”

In his Democracy Day speech on 12 June, President Muhammadu Buhari stated that the former inhabitants of local government areas (LGAs) previously overrun by Boko Haram had long since been able to return to them. Describing this assertion as “unfortunate, misleading and demoralizing,” the EYN President clarified that the four EYN District Church Councils (DCCs) which existed in the Gwoza LGA of Borno State prior to the insurgency are no longer there. “There are over 18,000 of our members who are still taking refuge in Minawao, Cameroon. There are also about 7000 of EYN members who are taking refuge in other IDP Camps in Cameroon […].” While some people have returned to Gwoza town and Pulka, “the total number of IDPs in the Cameroon Camps, who are over 95% from Gwoza, is over 47,000.” Additionally, 34 villages in southern Borno and northern Adamawa are currently deserted due to repeated attacks by Boko Haram.

The statement urges President Buhari to deploy “at least a battalion of military to the deserted areas behind the Gwoza Hills” in order to facilitate the return of refugees, and to send “more security personnel to volatile areas to mitigate further attacks.” Other calls are that the government should reconstruct and rehabilitate homes, schools and houses of worship destroyed by the insurgents, and make plans for the return of Internally Displaced Persons (IDPs) by the end of 2020.

The statement also addresses the high levels of insecurity prevailing throughout the country, urging the government “to live up to its constitutional responsibility” by bringing “the continuous killings, abductions, rape and all forms of criminality” to an end, and to urgently address “the activities of Fulani Militia, Armed Bandits and Kidnappers terrorizing our communities.”  It further implores State and Federal Governments “to ensure that Christian Religious Studies (CRS) is taught in public schools” in northern states where this is not occurring, and the “immediate reversal and correction of the imbalance in most appointments” by the president, which “have always been skewed to favour a particular section and religion.”

CSW’s Chief Executive Mervyn Thomas said: “The Boko Haram factions continue to be responsible for the most appalling violence in northeast Nigeria on an almost daily basis. However, aside from particularly appalling incidents that garner international attention, the majority of these attacks go unreported and unnoticed. Both local and international media outlets must do more to report on the violence which is unfolding across Nigeria. We are deeply saddened by the suffering endured by the EYN and its members, and echo its calls on the Nigerian government to take immediate action to mitigate and address attacks by all non-state actors.  We also reiterate our call to Nigeria’s international allies to encourage the government in its efforts to tackle every source of the violence effectively, including by offering technical assistance and humanitarian support to those who have been displaced or otherwise affected.”