Top Posts
Knowing the One Who Always Keeps His Word
Pregnancy Resource Centers Fight For Life Amidst Opposition
This World is Not Our Home
Lessons Learned From a Gingerbread House
Let There Be Peace on Earth
‘I Wanna Dance’ movie: Whitney Houston’s success and...
Fact Finding, Sight Seeing, and Prayer Walking
Kidney donation led to 8 life-saving surgeries
The Power of Curiosity
When Love Came Down at Christmas
Home ANS Reports Peaceably Gather Calls Churches To Stand For Their Rights

Peaceably Gather Calls Churches To Stand For Their Rights

Murrieta, California (ANS) – The Peaceably Gather movement is gaining followers across the country.  Pastor Brian Gibson of HIS Church in multiple locations, reports that hundreds of churches joined by opening last Sunday.  In defiance of “Shelter at home” orders, pastor Gibson calls religious leaders to stand up for their constitutional rights.

He now reports that thousands of churches are joining the movement to safely reopen.  He will travel this Sunday, May 24, 2020, to Chicago to offer a Memorial Day message.  The Elim Romanian Pentecostal Church invited him to come share.  This church, attended by immigrants, remember the dictatorship of Nicolae Ceaucescu.  The members have decided to stand up for the freedoms that the constitution guarantees them.   Pastor Gibson, is the founder of the PeaceablyGather.com  movement and he desires to safely reopen churches.  He encourages all faith leaders in America to peaceably and safely gather together.  In addition, he asks for our prayers for preaching in Chicago this Sunday.

How the Movement Started 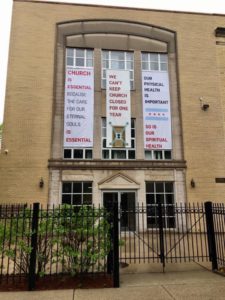 The Peaceably Gather movement derives its name from the 1st Amendment of the Constitution.  It states: “Congress shall make no law respecting an establishment of religion, or prohibiting the free exercise thereof; or abridging the freedom of speech, or of the press, or the right of the people peaceably to assemble, and to petition the Government for a redress of grievances.”

The Peaceably Gather Campaign is a response to local elected leaders across the country. They have unconstitutionally targeted places of worship and not allowed them to safely gather.

Over 200 churches opened their doors on Sunday, May 17th. Now, thousands are joining the Peaceably Gather campaign.

Kelly Shackelford, CEO and Chief Counsel for First Liberty, has committed that their team to provide legal defense.  This is for any church across the country that has its First Amendment rights violated.

First Liberty has represented numerous churches across the country during the pandemic.  As a result, they have won every case including a Federal statewide injunction opening all churches across KY.

Department of Justice Warns California Is Discriminating Against Churches