Top Posts
Colorado football coach Sanders’ unabashed faith
There’s A Light That Enters Houses With No...
Knowing the One Who Always Keeps His Word
Pregnancy Resource Centers Fight For Life Amidst Opposition
This World is Not Our Home
Lessons Learned From a Gingerbread House
Let There Be Peace on Earth
‘I Wanna Dance’ movie: Whitney Houston’s success and...
Fact Finding, Sight Seeing, and Prayer Walking
Kidney donation led to 8 life-saving surgeries
Home ANS ReportsCulture Pure Water in the Desert: James Turrell’s AKHOB 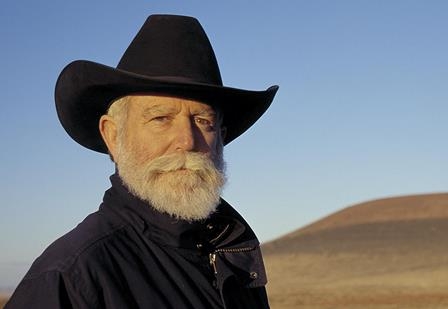 LAS VEGAS, NEVADA – For many people, Las Vegas is akin to Sodom—the city of sin—discussed in the Book of Genesis. On the surface, the comparisons between the two cities seem fair. Yet on a recent stop in Las Vegas, I found that there is light in the darkness, water among the waste, and solace in midst of sin. And the light, water, and solace was art.

The art I’m referring to is a Quaker artist, James Turrell’s, immersion installation work entitled AKHOB [1], an Egyptian word meaning pure or living water. Installed on the fourth floor of the Louis Vuitton City Center store in 2013 on the famous Las Vegas strip, the art is a masterful reflection on serenity in the midst of a metropolitan center, offering an enlightening experience in a metropolis saturated with mega-lights.

AKHOB contains three chambers: an opening black staircase leading to an oval passageway, and two larger rooms painted in white and drenched in color—emitted from LED lights—that change hues over a period of time.   According to our two hosts, Turrell called these chambers “ganzfeld” rooms, taken from the German meaning “entire field.”   The German psychologist Wolfgang Metzger was the first to use rooms of total immersion to test a human’s interaction with his or her surroundings. Turrell has perfected the experience into a cohesive work of transcendent art. Our hosts let us know that AKHOB is the only installation of its kind in the United States.   With rounded corners and blurred edges within the chambers, AKHOB provides an ethereal, eternal feeling, as if entering heaven. AKHOB won an award of merit with the Nevada Design Awards in 2013.

For those not familiar with Mr. Turrell (b. 1943) a short word is in store. Turrell is one of the leading visual artists living today, receiving countless awards throughout his storied artistic career. As a Quaker, Turrell has spent his life pursing light (the main medium he uses in most of his artwork and a synonym for Christ). According to Quaker Artist, “Turrell has produced over 120 one-man shows and taken part in over 115 group exhibitions on virtually every continent. He’s been awarded numerous honors, including the Legion of Honor, a MacArthur Foundation Fellowship, and a Guggenheim Fellowship. Several books, like Long Green and many articles, as in Time have been written about him. He appeared as the final artist in the BBC documentary American Visions [2]” 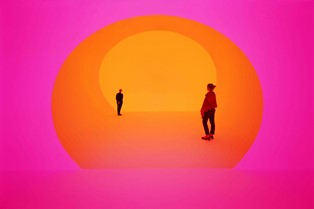 Art historian and critic, Arden Reed, likens Turrell to a Biblical character, stating, “Like some Old Testament prophet, whom he resembles, Turrell leads you on a journey from low to high, and from darkness into light. Literally” [3].

To help locate the work of Turrell, my friend, Las Vegas resident, and fellow artist, Jeff LeFever, made reservations in advance, something that is required to see the artwork (Jeff was told that there is usually a six-week waiting list). After receiving a short presentation by two hosts, Jeff, Cailan (my son), and I were escorted to the first room where we took off our shoes and put on white slippers (so we don’t damage to the floor, we’re told). We then ascend the staircase into the light. As we stood for the next fifteen minutes, the colors change from bright pinks to greens to tranquil yellows and blues. It was marvelous. I ask the hosts how tall the room is. One host responded, “41 feet high.” And the eternity room (as I called it)—located in the last open chamber—had a 10-foot drop (they had a trip alarm to ensure people didn’t get too close and fall over). The entire experience conveyed silence and stillness; we were literally engulfed in light, partakers in an illuminating experience. My only regret is that we couldn’t stay longer.

I asked Jeff LeFever, a former instructor at the Laguna College of Art and Design, his thoughts.

“I consider AKHOB to be the best artwork found in Las Vegas. It is rare to see an art so pure as to be transcendent, crossing all religions, genders, nationalities, cultures, and languages. Furthermore, AKHOB goes beyond activism, agendas, and propaganda. Turrell is one of the artists whose work achieves a philosophical quality and enters the realm of pure intellectual and sensual beauty. He touches on the spiritual beyond religious description while coming as close to nature as art gets. A masterful synthesis using light as the medium.” 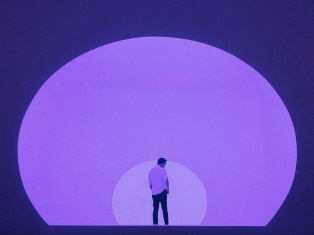 Upon exiting the immersion experience, Jeff was quick to point out that he needs to return to spend time in prayer. Such is AKHOB and Turrell’s artwork: majestic and ethereal, calling one to deeper thought and wonder.

Yet the infused spirituality evoked in Turrell’s work is not without criticism. According to Arden Reed, Turrell’s “spiritual side leaves [him] vulnerable to the charge of metaphysical dabbling.” And other critics “attack Turrell for being ‘spectacular’” [4]; a term meaning that he is elaborate and showy.

The impression one has after viewing Turrell’s work is difficult to determine for each individual, largely influenced by one’s worldview. For me, I’d agree with LeFever: Turrell’s artwork offers “Intellectual and sensual beauty,” something that is pristine in and of itself, spiritual and philosophical art worthy of deeper contemplation. Such is the case with AKHOB, living up to its name: pure water in the desert.