Top Posts
Colorado football coach Sanders’ unabashed faith
There’s A Light That Enters Houses With No...
Knowing the One Who Always Keeps His Word
Pregnancy Resource Centers Fight For Life Amidst Opposition
This World is Not Our Home
Lessons Learned From a Gingerbread House
Let There Be Peace on Earth
‘I Wanna Dance’ movie: Whitney Houston’s success and...
Fact Finding, Sight Seeing, and Prayer Walking
Kidney donation led to 8 life-saving surgeries
Home ANS Reports Religious Tension Concerns After Decision To Turn Hagia Sophia into Mosque

New Malden, England (ANS) – Christian charity CSW is deeply concerned at the decision of the Turkish government to turn the Cathedral of Hagia Sophia in Istanbul to a mosque, which they say risks heightening religious tensions and intolerance. 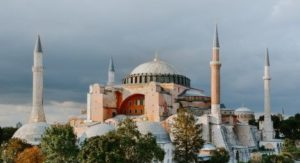 The decision was announced on 10 July by President Recep Tayyip Erdogan after the highest administrative court in Turkey annulled the site’s museum status, which was granted by the country’s first president, Mustafa Kemal Ataturk, in 1934. The cathedral was later designated a World Heritage site by the United Nations Educational, Scientific and Cultural Organisation (UNESCO). President Erdogan informed Turkish media that the first Muslim prayer will be held inside the cathedral on 24 July.

The cathedral was built between AD 532 and AD 537 under the direction of the Byzantine emperor, Justinian I. For over a millennium, Hagia Sophia was the Cathedral of the Ecumenical Patriarchate of Constantinople and the coronation place for Byzantine emperors. It was converted into a mosque in 1453 when Constantinople was conquered by Ottoman armies.

In a letter to President Erdogan, the Interim Secretary General of the World Council of Churches (WCC) said: “Today, however, I am obliged to convey to you the grief and dismay of the World Council of Churches – and of its 350 member churches in more than 110 countries, representing more than half a billion Christians around the world – at the step you have just taken. By deciding to convert the Hagia Sophia back to a mosque you have reversed that positive sign of Turkey’s openness and changed it to a sign of exclusion and division.”

In 2019, CSW made a submission to the UN Human Rights Council’s Universal Periodic Review (UPR) of Turkey which raised concerns regarding the country’s deteriorating human rights record. The situation for human rights has worsened significantly since the thwarted military coup of 15 July 2016. CSW has reported a sharp increase in anti-Christian sentiments and attacks, and a continuing official crackdown on Christianity in line with a guiding ethos that equates being Turkish with being Muslim.

CSW’s Chief Executive Mervyn Thomas said: “We are deeply concerned that the decision to turn the Hagia Sophia Cathedral into a mosque will reawaken old animosities and transform a cathedral that epitomised mutual respect and coexistence into a flashpoint of division and religious tension. For decades, President Erdogan has been promoting religious ultra-nationalism which has undermined Turkey’s secular constitution and contributed to a rise in discrimination and hate speech that creates an enabling environment for violence against those who do not adhere to Sunni Islam. These policies are making the situation for religious minorities increasingly precarious and stirring sectarianism in the region and beyond.”