Top Posts
Knowing the One Who Always Keeps His Word
Pregnancy Resource Centers Fight For Life Amidst Opposition
This World is Not Our Home
Lessons Learned From a Gingerbread House
Let There Be Peace on Earth
‘I Wanna Dance’ movie: Whitney Houston’s success and...
Fact Finding, Sight Seeing, and Prayer Walking
Kidney donation led to 8 life-saving surgeries
The Power of Curiosity
When Love Came Down at Christmas
Home ANS ReportsInspirational Rev. Sharon Risher Recalls Charleston Church Shooting

Rev. Sharon Risher’s mother, Mrs. Ethel Lee Lance, along with two cousins, a childhood friend, and five others were murdered on June 17, 2015, by a teenage white supremacist in the Mother Emanuel African Methodist Episcopal Church in Charleston, SC. 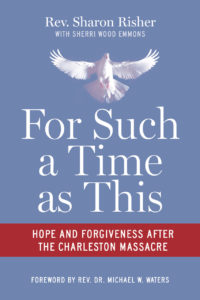 Cover artwork for For Such A Time As This

Rev. Sharon Risher has, since the shooting, faced the worst days of her life, learning to trust God’s timing and leaning on God’s loving presence to guide every step. Where her faith journey leads her is surprising and inspiring, as she finds a renewed purpose to her life in the company of other survivors.

For anyone grappling with how to forgive the unforgivable, rebuild lives in the shadow of death, and hold on to sanity in the midst of hate, Rev. Risher’s story in For Such a Time as This will help you find your faith, and ultimately encourage and heal.

Rev. Sharon Washington Risher was born and raised in Charleston, South Carolina. She earned a Masters of Divinity at Austin Presbyterian Theological Seminary and served as Staff Chaplain and Trauma Specialist at Parkland Hospital and as Associate Pastor for Congregational Care at Rice Chapel AME Church in Dallas, TX.

Since the Charleston massacre on June 17, 2015, in which she lost her mother, two cousins, and a childhood friend, Rev. Risher has been an advocate for revising gun laws, and is a spokesperson for the grassroots advocacy groups Everytown Survivor Network and Moms Demand Action for Gun Sense in America.

Rev. Risher has appeared on CNN, BBC Radio, Good Morning America, and CBS and has been interviewed or written for Time, Marie Claire, Essence, Texas Monthly, Vogue, and VOX. Her advocacy work brought her to the White House, where she witnessed President Barack Obama sign executive orders pertaining to new gun laws. A sought-after speaker, Rev. Risher has shared her story of loss, forgiveness, racism and gun law reform with audiences across the United States.

Now, Rev. Sharon Risher is ready to share her story with candor and courage in For Such a Time as This: Hope and Forgiveness After the Charleston Massacre (June 2019, Chalice Press, ISBN: 9780827243231).

Offering an intimate and powerful testimony of faith, family, and loss, Sharon be-gins the story with her mother, Ethel Lee Lance, seeking refuge in the church from poverty and scorn, raising her family despite unfathomable violence that rattled Sharon to her core years later.

For Such a Time as This is a story of transformation: how an anonymous hospital chaplain was thrust into the national spotlight, joining survivors of other gun-related horrors as reluctant speakers for a heartbroken social-justice movement.

Rev. Risher recounts her grief and the struggle to forgive the white supremacist whose face was on the front cover of every national media outlet, how she overcame her own struggles and answered the call to ministry, and shares how, in the loss of her mother, she has become a nationally known speaker revealing her raw, riveting story of losing loved ones to gun violence and racism.

For Such a Time as This will be available in both paperback and e-book formats on June 11, 2019 wherever books are sold, and is currently available for pre-order.