Tebow and his brother Robby are executive producers of the new film RUN THE RACE, telling the inspiring, fictional story of two high school athlete brothers who see their relationship tested as they seek different paths out of their troubled lives.

“Run The Race is about so much more than football. This is a story about overcoming the hard issues of life, about the power of sacrifice, the power of family, and the power of forgiveness,” Tim Tebow said.

“I love being a part of a project like this because it will impact lives, inspire hope, and even prompt action. When I read the script, I knew this was an important project to get behind.”

“The script pulled me in right away, and I wanted to bring it to life cinematically,” Robby Tebow said. “As somebody with brothers in a big, super-close family that has gone through a lot together, it resonated with me on a deep level.” 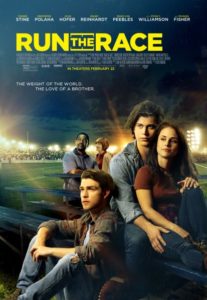 In RUN THE RACE, two desperate brothers sacrifice today for a better tomorrow.

Reeling from his mother’s death and his father’s abandonment, Zach, an All-State athlete, finds glory on the football field, working to earn a college scholarship and the brothers’ ticket out of town.

When a devastating injury puts Zach—and his dreams—on the sidelines, David laces up his track cleats to salvage their future and point Zach toward hope.

NFL legend Eddie George (THE BEST MAN) appears as a college recruiter. He found that the movie’s background of athletics created the perfect context for a story about the brothers’ struggles and relationship.

George said sports “really is a microcosm of how life is.

“We set out to make a film that engages the YA crowd while retaining a universal, timeless appeal,” said director Chris Dowling (WHERE HOPE GROWS). “Young adults crave stories built on authenticity and we deliver with real characters having real conversations about love, family and trying to find his or her place in this sometimes crazy world.”

“Everyone involved with Run The Race can’t wait to get this feature film in theaters,” said Producer Darren Moorman. “I want everyone to experience this authentic movie that tackles relevant themes in an entertaining way, where the romance is whimsical, the struggles are real, but the story-telling is fresh and poignant.”

Tebow’s RUN THE RACE had a stellar run at the box office with $6.3 million domestic total.

The movie is now available on DVD and Digital, showing what’s possible when you run to—instead of from—the overwhelming love of God.

Produced by Tim and Robby Tebow, written by native Texan Jake McEntire, directed by Chris Dowling (WHERE HOPE GROWS and PRICELESS) and filmed in Birmingham with stars like Mykelti Williamson, Frances Fisher and Eddie George.

With themes of forgiveness, family and unconditional love, Run The Race is the perfect film to engage your church, ministry or organization, resources are available to help spread the word about this powerful film.

Based on the movie Run the Race, this six-session Bible study combines powerful scenes from the film with the timeless message of faith, hope, and love.

Through illustrations, Scripture, and discussion, you will be invited to experience the triumph of grace and hope that only comes from trusting the God who “loves us like crazy” and never stops pursuing us. Also available is a Run the Race Leader Kit which includes resources for leading a six-session group study: one Bible study book, one DVD, and extra leader resources.

Digital Resources in the form of an eBook and digital leader kit available at LifeWay.com/RuntheRace