Edinburgh, Scotland (ANS) – The Scottish Parliament has commended the work of churches throughout the pandemic in a debate on the Stories of Hope report, published in December 2020 by the Evangelical Alliance and Serve Scotland. The report calculated that churches across Scotland had delivered 212,214 acts of support during the first lockdown and that these acts were delivered by 3,212 volunteers and impacted 55,671 beneficiaries. 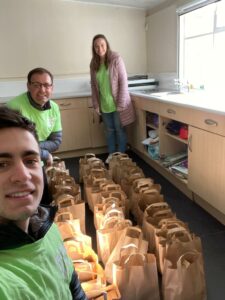 The motion, which has been submitted by Jeremy Balfour, and was held at the Scottish Parliament on the first anniversary of the UK COVID-19 lockdown, acknowledges that “churches in 180 locations across Scotland worked in partnership with key stakeholders, including supermarkets, community councils, NHS boards, food banks, voluntary support groups and charities, to deliver services to support vulnerable groups, including older, homeless and young people; recognises the important role that it considers churches and charities play in communities across Scotland, including in the Lothian region, and praises all those involved in delivering these services during the pandemic.”

The report found churches across Scotland had developed support networks and established projects to support the most vulnerable and isolated in their communities. Projects were active across the country from the Highlands to the Borders, across the breadth of denominations and in partnership with a number of charities including CAP Scotland, the Bethany Trust, and Glasgow City Mission.

Kieran Turner, Public Policy Officer for the Evangelical Alliance in Scotland says, “Often the work of churches in the community goes under-reported and as a result government and parliament are not aware of the role of the church in wider society. We are grateful to Jeremy and to all the MSPs who are supporting the debate for the opportunity to show how the church spreads hope and the impact that has been made at a national level during the pandemic.”

The report also highlighted the importance of churches partnering with local businesses and other agencies as more than two-thirds of the projects identified were delivered in partnership to provide support to those in need. Supermarkets, community councils, businesses, NHS boards, housing associations, voluntary support groups, and food banks have all worked with churches on the ground in these projects. In addition, 11 local authorities were identified, sometimes by multiple projects, as providing emergency funding for weekly support costs.

Turner continues, “Having the Scottish Parliament debate the report and commend these churches will raise awareness and challenge perceptions of what the church is and what the church does in Scotland. The church is a force for good in Scotland and operates at a scale  of national significance meaning it must be a core part of the government’s rebuilding plans post pandemic.”