High Wycombe, England (ANS) – A keyboard that will help people interact with the Bible in the Mbelime language, spoken in West Africa, as well as giving Mbelime speakers a new sense of self-esteem, has been developed by a team serving with Wycliffe Bible Translators.

The keyboard was developed in May and is already in use by Mbelime speakers. 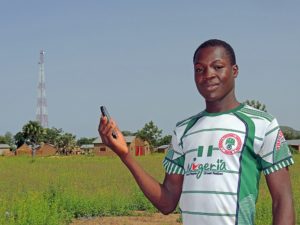 Johannes Merz, who together with his wife Sharon serves with Wycliffe in Benin, says: ‘In the past few years, smartphones have become an integral part of life for many people in Benin, as they have become more affordable. Many people use them for the same purposes as others may use a computer.’

Johannes continues: ‘But for Mbelime speakers, there has been a problem. How can you write in Mbelime on your smartphone when you don’t have all the letters and accents available? They wanted to write messages to each other in their own language or enroll in Mbelime literacy classes that Nestor, one of the Mbelime translators, offers via WhatsApp. But they were frustrated, since they couldn’t properly write their language. Mbelime speakers kept asking, “When is there going to be an Mbelime keyboard for our phones?” It was painful repeatedly saying we didn’t know. Imagine not being able to write your language on your phone!’ 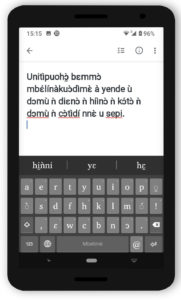 That all changed when Keyboard App Builder, a new free app, was released in May. Johannes continues: ‘Up till then, developing such a keyboard was a difficult task that required advanced programming skills. This new app changed that. It was a gamechanger.’

Johannes downloaded the app, together with the Keyman Developer app, and got to work. First came learning the software, then creating an Mbelime-specific keyboard and the Mbelime word list to add the predictive text feature. After that, the development tools packaged the keyboard into an app that installs it on android smartphones. It is now available on Google Play and people can pass it on directly from phone to phone.

Feedback from Mbelime speakers has been positive. The president of the Association for the Promotion of the Bible in Mbelime (APBM) shared via a WhatsApp group: ‘Thank you, our partners the Merzes, for their total involvement in seeing our language progress.’

One of the Mbelime translators wrote: ‘Thank you for all your efforts! I’m very happy with you. Together with you, I have faith that our Mbelime language will continue to advance.’

Johannes says: ‘Mbelime is a minority language, so the new keyboard is an important asset. It shows that Mbelime is an important language that works on electronic devices. The area in northwestern Benin where most of the Mbelime speakers live is very remote, with no paved roads. Development of new infrastructure, such as mobile phone coverage, is always slow and lags behind the rest of the country.’

Sharon comments: ‘Mbelime speakers always feel they’re a step behind the rest of the country, and others tend to view them negatively, thinking they are backward and need to be civilised. As a result, they have a low self-esteem of themselves and their language. To be among the first languages of the country to have a language-specific keyboard for smartphones helps counter these views. You no longer need to master the prestigious national language French to use a smartphone. Using Mbelime in relation to technological advances is thus key in promoting and valuing Mbelime. This, in turn, is crucial for motivating people to use translated Scripture.’

Johannes concludes: ‘As the translation team completes books of the Bible, we’re preparing to publish them as Scripture apps. Such apps make it possible to listen to the Bible text and read it onscreen at the same time. They have proven popular in other languages. We’re looking forward to seeing the first Scripture app in the next year or two. The Mbelime keyboard will help people interact with these apps, such as doing text searches.’

Eugene Peterson spoke to ‘angels’ as he slipped...