HYDERABAD, INDIA (ANS) — Hindu extremist threats have driven a pastor in Nepal into hiding following a leak onto social media of a restricted audience-interview he gave on his journey to Christ, according to Morning Star News.

Pastor Sukdev Giri of Trinity Fellowship church in Chitwan District has received death threats, he said. He has changed his phone number, but his family and friends are also receiving threatening calls, he told Morning Star News. 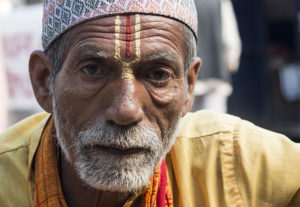 In a sign of how the Himalayan country has become increasingly radicalized, Pastor Giri, 59, has been unable to return home from ministry travels since a video of his comments hit YouTube in mid-August.

“It is the first time a Christian [in Nepal] has been targeted for sharing [on social and other media] about his past religion and introduction into Christianity,” legal advocacy group Alliance Defending Freedom’s allied attorney in Nepal, Ganesh Sreshta, told Morning Star News. “It is turning out to be a high-profile issue, with Hindu fundamentalist groups linked to prominent political leaders taking interest in this video.”

The video shot in March at the International Christian Media Workers Summit in Kathmandu, where Pastor Giri was one of the speakers on a panel, was available only to Christian audiences until a Nepalese Christian woman abroad posted it on YouTube. During the panel presentation on advice for Christian media workers, Nepalese radio journalist Sunil Raj Lama asked Pastor Giri to talk more about belief systems in Nepal.

“It is not something I would discuss with anybody just anywhere, but his question was very genuine,” Pastor Giri told Morning Star News. “Although I had cautioned Lama to edit the video and not to circulate it outside the Christian circle, the [Christian] persons who were the first to watch it on a private channel insisted that, ‘It is a hard truth – people need to hear it.”’

The unidentified Nepalese woman abroad who had access to the private channel posted the video on YouTube on Aug. 11, and the flood of hostile comments began.

“Highly abusive and derogatory words were used against me,” Pastor Giri said. “Calls also started. And I immediately discarded my old SIM card and kept the phone away for some days. I have dedicated my entire time to travel, as my family feels it is unsafe for me to stay in my hometown [undisclosed], in Chitwan. I’m currently busy with my ministry work in other parts of Nepal.”

In the video, the pastor spoke about how, before he became a Christian, he noticed sin and corruption in the world and wondered about their roots. The gospel helped answer that question.

“Moreover, I did not cook up any story on my own on Hindu deities,” he said. “I said that I come from a Hindu family, and that I know the deities worshipped by Hindus and also those shunned from offering worship. For example, you will not find temples dedicated to Brahma, who is believed as the creator god. He is regarded as the deity but is not worshipped. It is written in the Puranas [ancient texts of Hindu literature] that Brahma sexually assaulted his own daughter and married her. Brahmins don’t worship Brahma for this reason.”

Nepal was ranked 32nd on Christian support organization Open Doors’ 2019 World Watch List of the countries where it is most difficult to be a Christian.