Top Posts
Knowing the One Who Always Keeps His Word
Pregnancy Resource Centers Fight For Life Amidst Opposition
This World is Not Our Home
Lessons Learned From a Gingerbread House
Let There Be Peace on Earth
‘I Wanna Dance’ movie: Whitney Houston’s success and...
Fact Finding, Sight Seeing, and Prayer Walking
Kidney donation led to 8 life-saving surgeries
The Power of Curiosity
When Love Came Down at Christmas
Home Tags Posts tagged with "European Center for Law and Justice"

European Center for Law and Justice

This article is Part One of Two

STRASBOURG, France (ANS) — According to a ground-breaking report from the European Centre for Law and Justice, cited by Remix https://rmx.news , a network of non-governmental organizations financed by George Soros have gained enormous influence in the European Court of Human Rights (ECHR), a court that essentially sets many of the laws related to gender, immigration and religion across Europe. 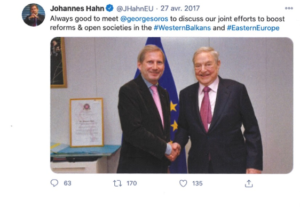 George Soros, a Hungarian-born American citizen, “has been a prominent international supporter of democratic ideals and causes for more than 30 years. His philanthropic organization, the Open Society Foundations, supports democracy and human rights in more than 100 countries,” as stated by his personal website (https://www.georgesoros.com)

The author of the Remix article, John Cody, managing editor, says the ECLJ report details how the objective for the ECHR is now to promote and enforce the “open society” ideology, which has been championed by billionaire financier George Soros.

According to the French magazine Valeurs Actuelles, Soros has become the master of “causing chaos in the world under the guise of altruism.”

The magazine details how nearly all the judges from the ECHR received funding at some point in their careers from the Open Society Foundations (OSF), which Soros has provided with €18 billion ($221 billion) of his own money.

The Remix article quotes Grégor Puppinck, director of the European Centre for Law and Justice, who says that many of the judges on the ECHR are directly linked to Soro’s Open Society Foundation.

The ECLJ report indicates that it is no coincidence that so many countries are legalizing same sex unions, same sex adoption of children and abortion on-demand. All of this is happening with the assistance of the ECHR, especially judges who have close links to Soros-backed organizations.

The decision was later reversed on appeal with the help of Grégor Puppinck, lawyer and director of the French European Centre for Law. After this victory, the Italian government awarded the French lawyer with the cavaliere della Repubblica, the Italian equivalent of the Legion of Honor.

Puppinck says that such conflicts of interest are not uncommon for ECHR, with a wide array of “Soros judges” working on the issues important to the Open Society Foundation.

These relationships are also present in the judiciary in Poland, including the example of Lech Garlicki, a former constitutional court justice. Judge Lech Garlicki adjudicated cases of organizations while participating in programs run by his organizations.

Garlicki actually adjudicated on the bench in the ECHR in cases involving Soros-backed organizations, such as the Open Society Institute and The Helsinki Human Rights Foundation, while participating in educational programs run by these organizations.

Remix offers news and commentary from Central Europe, the Visegrád countries of the Czech Republic, Hungary, Poland and Slovakia, a cultural and political alliance, all of which are members of the EU and of NATO, to advance co-operation in military, cultural, economic and energy matters with one another and to further their integration to the EU.