Top Posts
Knowing the One Who Always Keeps His Word
Pregnancy Resource Centers Fight For Life Amidst Opposition
This World is Not Our Home
Lessons Learned From a Gingerbread House
Let There Be Peace on Earth
‘I Wanna Dance’ movie: Whitney Houston’s success and...
Fact Finding, Sight Seeing, and Prayer Walking
Kidney donation led to 8 life-saving surgeries
The Power of Curiosity
When Love Came Down at Christmas
Home Tags Posts tagged with "Indivisible"

LOS ANGELES, CA (ANS) – Based on the extraordinary true story of Army Chaplain Darren Turner and his wife Heather, INDIVISIBLE, the inspiring, new film that offers hope for every marriage, released to home entertainment on Blu-ray™ combo pack, DVD and Digital Jan. 29. 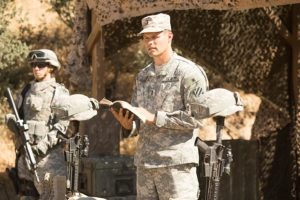 The film, which earned an A rating on CinemaScore, is based on the true story of a resilient military family finding the faith and love to fight through hardships that threaten their marriage. INDIVISIBLE features Sarah Drew, Justin Bruening, Jason George, Tia Mowry and Madeline Carroll.

With a strong, faith-filled marriage, the Turners are ready to follow their calling: serving God, family and country.

Despite a desire to stay connected with their loved ones, the harsh realities of war take a daily toll over the course of the battalion’s extended deployment. Meanwhile back home, babies are born, kids keep growing and nerves are frayed with every late-night knock on the door.

From the director of THE GRACE CARD and the studio that brought you FIREPROOF and WAR ROOM comes INDIVISIBLE, the story of one marriage … one family … under God.

INDIVISIBLE is now available on DVD in Christian Booksellers Association (CBA) stores and on DVD and in a Blu-ray™ Disc/DVD/Digital combo pack elsewhere.

INDIVISIBLE is produced by Reserve Entertainment, Provident Films, The WTA Group, Graceworks Pictures and Calvary Pictures. The home entertainment version is distributed in CBA stores by Provident Distribution and into the general consumer market by Universal Pictures Home Entertainment.