Top Posts
When Love Came Down at Christmas
A Walk of Faith Begins with a Step...
God is Rich in Mercy
Everyone has a Story to Share
‘Till’ movie: Racial murder helped spark civil rights...
Leaning His Head On Jesus, This Evangelist Hears...
Timing, common ground, and fruitfulness in witness
Step Out of the Traffic
In Support of Ukraine
Living an Imperfect, Unfinished Life
Home ANS Feature INDIVISIBLE: A War-Fighting Chaplain finds a Battle Raging . . . At Home

MEMPHIS, TN (ANS—Nov. 1, 2018) — From the battlefields of Iraq to trouble on the home front, INDIVISIBLE is the inspiring, new film about families finding the faith and love to fight through hardships that threaten their marriages.

INDIVISIBLE is based on the true story of a decorated Army chaplain, haunted by battlefield experiences that put his marriage in jeopardy, and how this resilient family bravely fights to reintegrate with each other and for love to win out. 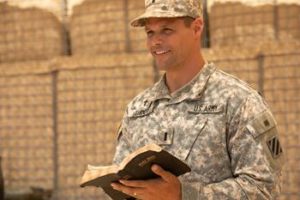 It’s the extraordinary true story of Army Chaplain Darren Turner and his wife Heather, whose lives are fully devoted to serving God, family and country. But when war etches deep battle scars—both overseas and on the home front—the Turners’ rock-solid marriage is shaken to its core.

Carrying burdens the other can’t comprehend, they must decide if they’re willing to face one more battle: the fight to save their marriage. From the director of THE GRACE CARD and the studio that brought you FIREPROOF and WAR ROOM comes the story of one marriage … one family … under God.

Despite a desire to stay connected with their loved ones, the harsh realities of war take a daily toll over the course of the Battalion’s extended deployment. Meanwhile back home, babies are born, kids keep growing, and nerves are frayed with every late-night knock on the door. 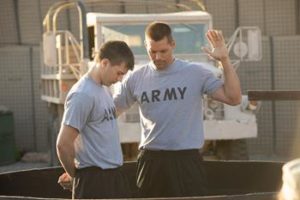 Chaplain Turner prays with a soldier in the movie INDIVISIBLE

A military chaplain is often a behind-the-lines job, but Army CH (CAPT) Darren Turner served on the battlefield and brought the scars of war home with him as he and his family attempted to reintegrate their lives upon his return.

For military families, every deployment is a two-front war—the War Zone and the Home Front. Based on a true story of a military couple choosing to fight to save their marriage, INDIVISIBLE shows the incredible resilience of these courageous families when reintegrating lives is fraught with challenges.

“Marriage is hard, regardless of whether someone is in the military or not.  Most people I know would agree, and I believe this is because we are born with a self-centered ‘compass’ that always wants what we want,” said Darren Turner in a recent interview with ASSIST News Service (ANS) – www.assistnews.net

“I also believe marriage is designed by God to give us the opportunity to grow out of those self-interested tendencies because God tells us in Scripture to ‘prefer our spouse over ourselves.’ That is impossible apart from His power to do so.  But when God is the center of a marriage and the desire is to follow His ways because He knows best, the sky is the limit on how good and rich this marriage can become.”

The Turners said: “We hope all audiences will see part of themselves in this film to some degree, and regardless of their past, recognize there is hope for the future.  We found hope in the life, death, and resurrection of Jesus Christ, and that powerful hope gives us the confidence and ability to love one another, forgive one another, and see one another as God sees us.  After the deployment, we both chose to be selfish and not honor each other, and that almost destroyed our marriage and family.  If it wasn’t for true forgiveness and for other people in our lives that fought for us, we wouldn’t have made it through that dark time. We thank God daily for his grace in providing forgiveness, and for providing others who loved us when we weren’t very lovely.”

They continued: “We hope that all people, regardless of military or non-military, will see that it’s OK to be broken and not know all the answers, but also in that brokenness to seek God and His forgiveness through Jesus Christ.  Also, we hope that the non-military audience will further appreciate the unique challenges that all military families go through, and to befriend current and former military members in their community, including Gold Star families.  Finally, we hope that other Chaplains and faith leaders will self-assess and if needed seek help themselves, so that they can in turn serve God and their community even better.”

The primary hero in Indivisible is Jesus Christ, said Darren. “He carried us when we couldn’t carry ourselves, or one another. He used others to encourage us with the truth that God is for our marriage and family when we wanted out of it.  The secondary heroes of Indivisible are all service members that we represent. They volunteer to die for you and I when they serve, to give their lives if necessary for you and I.  That reminds me of my faith in Christ every day because Christ volunteered to die in our place, and rose again to show us death is not the end of the story! I’m honored to serve our men and women in uniform!”

Asked to talk about challenges military families face on returning from battle, the Turners stated: “Reintegration is difficult on its own, but we can make it better by coming home and really listening to and respecting one another’s time apart.  People change and grow, and service members hopefully recognize that not only was their time away significant, but their family’s time without them was significant as well.”

Their advice to military families who have been separated by war or deployment? “Get to know one another all over again!”

They added: “Military marriages are unique in many ways for sure, but marriage is marriage.  There is no provision in Scripture that permits military marriages to struggle because their life is more unique or difficult.  God calls husbands to love their wives just as Christ loved the Church and gave Himself up for her.  Let’s start there.  Imagine a marriage where that is the norm rather than the exception.  Families would be transformed if we men did that one thing, much less if the other mandates for marriage and family in Scripture were followed.

“I personally want to do that much better than I often do.  It really comes down to, do I believe and behave like I know better than God how to be married? If so, then I do my own thing, my own way and get the results I get, which is usually conflict and frustration (James 4:1-2). But if I want God’s results, I should surrender to His ways. That’s my prayer for my marriage and family, and all others as well.”

The film premiered in theaters nationwide Oct. 26. It features Sarah Drew, Justin Bruening, Jason George, Tia Mowry and Madeline Carroll. Sarah Drew, who starred for nine years on Grey’s Anatomy’s, is featured as Heather Turner in INDIVISIBLE and is the executive producer of the film.

INDIVISIBLE brings the battlefields of Iraq to vivid life and opens the door on challenges faced by families at home, both while loved ones are gone and when they strive to reintegrate with each other. The film was shot in Memphis, Tennessee; Iraq scenes were filmed near Santa Clarita, California, north of Los Angeles, at the Middle East Village set on Blue Cloud Movie Ranch.