Top Posts
Colorado football coach Sanders’ unabashed faith
There’s A Light That Enters Houses With No...
Knowing the One Who Always Keeps His Word
Pregnancy Resource Centers Fight For Life Amidst Opposition
This World is Not Our Home
Lessons Learned From a Gingerbread House
Let There Be Peace on Earth
‘I Wanna Dance’ movie: Whitney Houston’s success and...
Fact Finding, Sight Seeing, and Prayer Walking
Kidney donation led to 8 life-saving surgeries
Home Tags Posts tagged with "Joel Rosenberg"

JERUSALEM, Israel (ANS) — Millions of Israelis and Palestinians are suffering through the brutal and wrenching new war that erupted last week.

Yet they are not alone, according to ALL ISRAEL NEWS https://www.allisrael.com 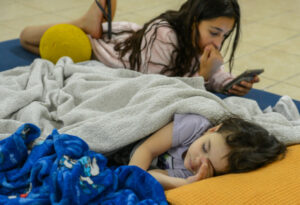 Two Jewish families spend their days in a bomb shelter in Ashkelon, Israel.

“Indeed, as the terrorists in Gaza fired more than 3,000 rockets at Israel in the past six days – and as the Israeli military has struck Hamas and Islamic Jihad targets with deadly force – I’ve been so encouraged by hearing from Evangelical leaders and lay people all over the planet,” writes Author Joel Rosenberg.

As Israel headed into the biblical holiday of Shavuot (Pentecost) last night, tens of millions of Evangelical Christians gathered in churches in the U.S. and around the globe in response to Psalm 122:6, which commands believers to “pray for the peace of Jerusalem” and all the people of the Land. Shavuot (Pentecost), also known as the “Feast of Weeks” or “Holiday of First Fruits” commemorates the giving of the Torah on Mount Sinai.

Rosenberg said texts and emails have come from the U.S., Canada, Europe, Africa, the Arab world and the Far East.

A ministry leader in Paris wrote, saying: “May the Prince of Peace restore peace and order and keep both Israelis and Palestinians safe, especially those who love and follow the Lord.”

An Arab pastor in Jordan wrote, “We pray in the name of our Lord Jesus Christ to bring peace to the area.”

“Our hearts weep with you,” wrote a woman from Canada. “We continue to pray for peace, protection and spiritual awakening.”

A grandmother in Pennsylvania said: “Praying for all of you. We don’t know what it is like, but I’m sure it is very scary” to be in such a war zone.

A dentist in Virginia wrote, “Have been heartbroken and praying fervently for your country and ours. The world is in such a precarious balance of unrest. With each day, things just seem to get worse. Resting in the fact that our God is in control, and knows all, and will keep you safe.”

On Rosenberg’s sister site, ALL ARAB NEWS, the lead article was a wonderful column by a prominent Palestinian pastor based in Ramallah who is calling on Christians around the world to “pray urgently and without ceasing for peace.”

“They tell me they are praying for the restoration of calm and quiet on both sides of the border,” Rosenberg noted.

He said they are also praying for comfort and healing for all those who have been physically or emotionally wounded and traumatized by the war, especially the children who are the most vulnerable.

What’s more, they are mobilizing their families, friends, neighbors and church congregations to pray as well.

“I can also report that Israelis who are not particularly religious have been deeply touched by Christians reaching out to them by email and social media, sharing Scriptures with them and promising to pray specifically for them.

“One Israeli friend of mine who is an atheist wrote to me this morning, ‘Even as a non-believer, it gives me strength to know we have an army of Christian friends behind us.’”

She then shared a text message with Rosenberg she received from a Christian friend of hers, about prayer groups that have been meeting to pray for over 20 years. 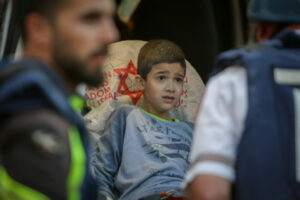 8-year-old Eitan Vhnstok was hurt by a rocket fired from the Gaza Strip in Ashkelon, southern Israel.

“This has to be a difficult time for you and for Israel. Below is a prayer I received at 4:30 a.m. from a dear friend of mine. She started a prayer group at her home in 2000 that still meets every Thursday night to pray for the U.S. and for Israel. During this crisis many of the group will write out prayers and text each other so we can all pray in agreement. There are numerous groups like this and that number in the thousands praying for Israel, and the Jewish people at this time.”

“Father, we stand with Israel!  We pray the Israeli leaders will not compromise an inch of their God-given promised land, in Jesus Name! We agree with Netanyahu that Israel does not fear the long road ahead! In Jesus’ Name, we resist on behalf of Israel, the spirits of antichrist, tyranny & demonic compromise over this war. Israel will be all the prophets have declared over it.  There is nothing impossible with our God!!”

Pastor Skip Heitzig was one of the first Evangelical friends who reached out to Rosenberg when the rockets began.

Heitzig is a member of the board of Near East Media, the non-profit organization that oversees ALL ISRAEL NEWS and ALL ARAB NEWS. He is also the senior pastor of Calvary Albuquerque, one of the largest Evangelical congregations in the U.S. with some 15,000 attendees.

“Hamas has repeatedly demonstrated its penchant for terrorizing the citizens of the Jewish state, while the United States can only tell Israel to show restraint,” he wrote in a statement specifically for Rosenberg’s report.

“This is madness. After living in Israel and hosting several groups to the Land, I have the utmost respect for Israel’s position in this crisis. As a Christian leader, I am urging everyone to pray for the spirit of shalom – peace – to prevail in Israel, and Gaza, and for the civil unrest that is sweeping the country to cease.” Read more here: https://www.allisrael.com/solidarity-sunday-as-terrorists-in-gaza-fire-3-000-rockets-tens-of-millions-of-evangelicals-heed-call-to-pray-for-israelis-and-palestinians