Top Posts
Colorado football coach Sanders’ unabashed faith
There’s A Light That Enters Houses With No...
Knowing the One Who Always Keeps His Word
Pregnancy Resource Centers Fight For Life Amidst Opposition
This World is Not Our Home
Lessons Learned From a Gingerbread House
Let There Be Peace on Earth
‘I Wanna Dance’ movie: Whitney Houston’s success and...
Fact Finding, Sight Seeing, and Prayer Walking
Kidney donation led to 8 life-saving surgeries
Home ANS Feature Why are Iranian Muslims Converting to Christ? 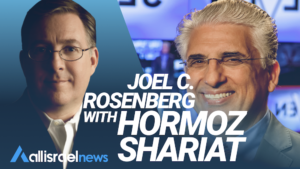 Shariat is the founder of Iran Alive Ministries and a 24/7/365 satellite TV network that broadcasts the Gospel into Iran and the Farsi-speaking world.

He is also the author of a recently published book about his life and his ministry – it’s a book I’ve been encouraging him to write for some 15 years, as long as I have known him, and it’s titled, “Iran’s Great Awakening: How God is Using a Muslim Convert to Spark Revival.”

Rosenberg was honored to write the foreword and highly recommends you buy a copy and read it as you begin 2021.

Rosenberg said: “The book explains how and why Shariat – who grew up in Iran and was on the streets of Tehran in 1979 shouting, ‘Death to Israel! Death to America!”’– left Islam after a side-by-side study of the Qur’an and the Bible, and why he and his wife became devout followers of Jesus.

“That’s a fascinating journey in its own right.”

Shariat explains how the Iranian regime murdered his brother. He also explains why he and his wife started a Gospel TV network, watched by millions of Iranians, even though it has been illegal in Iran to own a satellite dish.

Shariat also provides an insider explanation of why so many Iranian Muslims are leaving Islam and how many are becoming Christians, a historic phenomenon that few people know about.

“To be sure, Muslim conversion to Christianity is a very sensitive and controversial topic,” Rosenberg said.

“But given that so many Muslims are heading down this road – particularly in Iran – it is a subject worth examining carefully.”

Rosenberg said one intriguing development that Shariat has picked up on and spoke to him about in their interview is the fact that Shia Muslims who leave Islam become followers of Jesus and start studying the Bible eventually abandon their hatred of Israel and the Jewish people.

Shariat, who spoke at a conference in Jerusalem that Rosenberg organized several years ago, deeply loves Israel and the Jewish people. “He believes that Iranian Christians who are transformed by the power of the Holy Spirit cannot help but grow to love Israel because the God of the Bible loves Israel so much and has such an exciting plan for Israel in biblical prophecy.”

In this exclusive interview for ALL ISRAEL NEWS, Rosenberg spoke with Shariat about his journey, his network, his book and this ongoing and enormously important story.


Joel C. Rosenberg is the editor-in-chief of ALL ISRAEL NEWS and ALL ARAB NEWS and the President and CEO of Near East Media. A New York Times best-selling author, Middle East analyst, and Evangelical leader, he lives in Jerusalem with his wife and sons.