Top Posts
There’s A Light That Enters Houses With No...
Knowing the One Who Always Keeps His Word
Pregnancy Resource Centers Fight For Life Amidst Opposition
This World is Not Our Home
Lessons Learned From a Gingerbread House
Let There Be Peace on Earth
‘I Wanna Dance’ movie: Whitney Houston’s success and...
Fact Finding, Sight Seeing, and Prayer Walking
Kidney donation led to 8 life-saving surgeries
The Power of Curiosity
Home Tags Posts tagged with "Leprosy"

WILLS POINT, TEXAS (ANS) — As the World Health Organization notes, leprosy is an ancient disease,[1] but it still rears its ugly head today.

Those who are afflicted know very well of the devastation it causes. They become the outcasts, the exiles and the untouchables. Some are called “cursed” by their families and kicked out to the streets. They suffer, both physically and mentally. 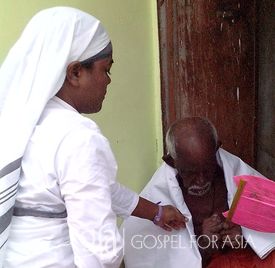 A Sisters of Compassion blesses an elderly patient with some clothing

Amidst their suffering, these outcasts typically form or join leprosy colonies, where they and others afflicted with leprosy may find some modicum of solace. Men, women, children and the elderly can be found living in these colonies.

Difficult conditions and very minimal, if any, medical attention offer little but despair to leprosy patients. However, GFA (Gospel For Asia)-supported workers, such as Sisters of Compassion, aim to serve and help those suffering.

One such instance occurred when a team journeyed to a leprosy colony with 32 families and 11 elderly patients. The team saw the destitution and hardship these people faced, especially the aged. One 80-year-old man lived in a cluttered, dirty house that smelled because he had no one to take care of him. Unable to clean it, all he could do was lay in his bed. Filled with compassion, the sisters cleaned his house, did his dishes and gave him a bath.

“My family members have left me on my own in this condition,” the old man said. “But I am thankful that you have served me and shown me love.”

The sisters then went on to distribute clothing and towels to all the elderly in the colony.

“I am very much thankful to the sisters for their sacrificial work,” Jaasau, one of the patients said.

Most of the elderly patients don’t receive proper care, even from their families.

“Though I have a family, I never get love from them,” another patient, Gershon, said. “But I thank you for your sacrificial service.”

Before they ended their visit, the sisters encouraged the patients, telling them of God’s love.

“God always remembers His people,” one of the Sisters of Compassion said. “He will never leave them nor forsake them.”